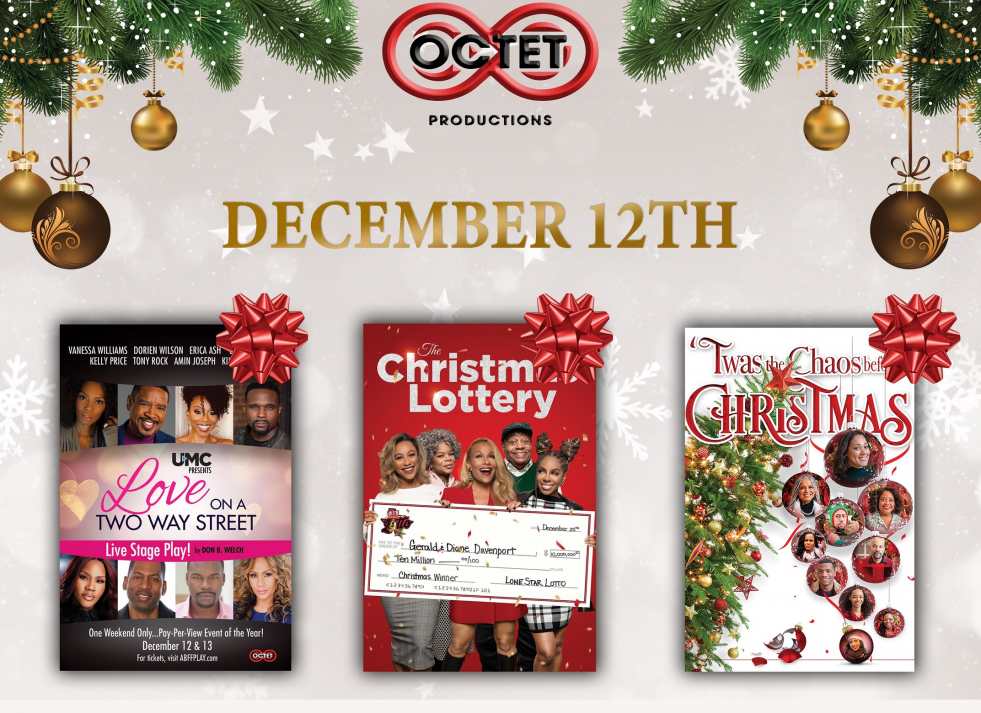 OCTET Productions is Spreading Joy Directly Into your Homes or your Favorite Device
WASHINGTON - EntSun -- OCTET Productions is bringing a full day of film with an exclusive experience of theater directly to entertainment lovers nationwide via television and pay-per-view outlets, On Saturday, December 12, 2020.

The third offering of the day, is a LIVE Stage play "Love On A Two Way Street", presented by UMC; Written and Directed by Donald B. Welch with an All-star cast which includes:  Vanessa Williams, Erica Ash, Dorien Wilson, Tony Rock, Amin Joseph, Darius McCrary, Kiki Haynes and special guest star R&B Superstar Kelly Price.   Adjusting to life during a pandemic, we have taken a stand against COVID-19 and shall NOT allow this it to stop the Theater!  Thanks to the American Black Film Festival (ABFF), who has developed the ABFFplay app, we have found a way to bring the stage to viewers for the first time in history.  On the weekend of December 12-13, audiences will have the opportunity to "take their family to the theater" for a LIVE show, right from their living room (or whichever room they elect to watch), choosing to attend various showings and also elect to attend a Virtual Meet and Greet with the Cast on Sunday, December 13th at 3pm PST.   For tickets visit:  https://ABFFplay.com to download the App. Get your tickets in advance to enjoy the theater wherever you are.

More on EntSun News
Changing times require out of the box thinking and OCTET Productions believes the show must go on!

Viewers of all the show offerings on December 12th are encouraged get social with us using the social media platform of choice tagging @octetproductions and using the hashtags: #thechristmaslottery #twasthechaosbeforechristmas #loveonatwowaystreet

To stay informed on all projects visit www.octetproductions.com