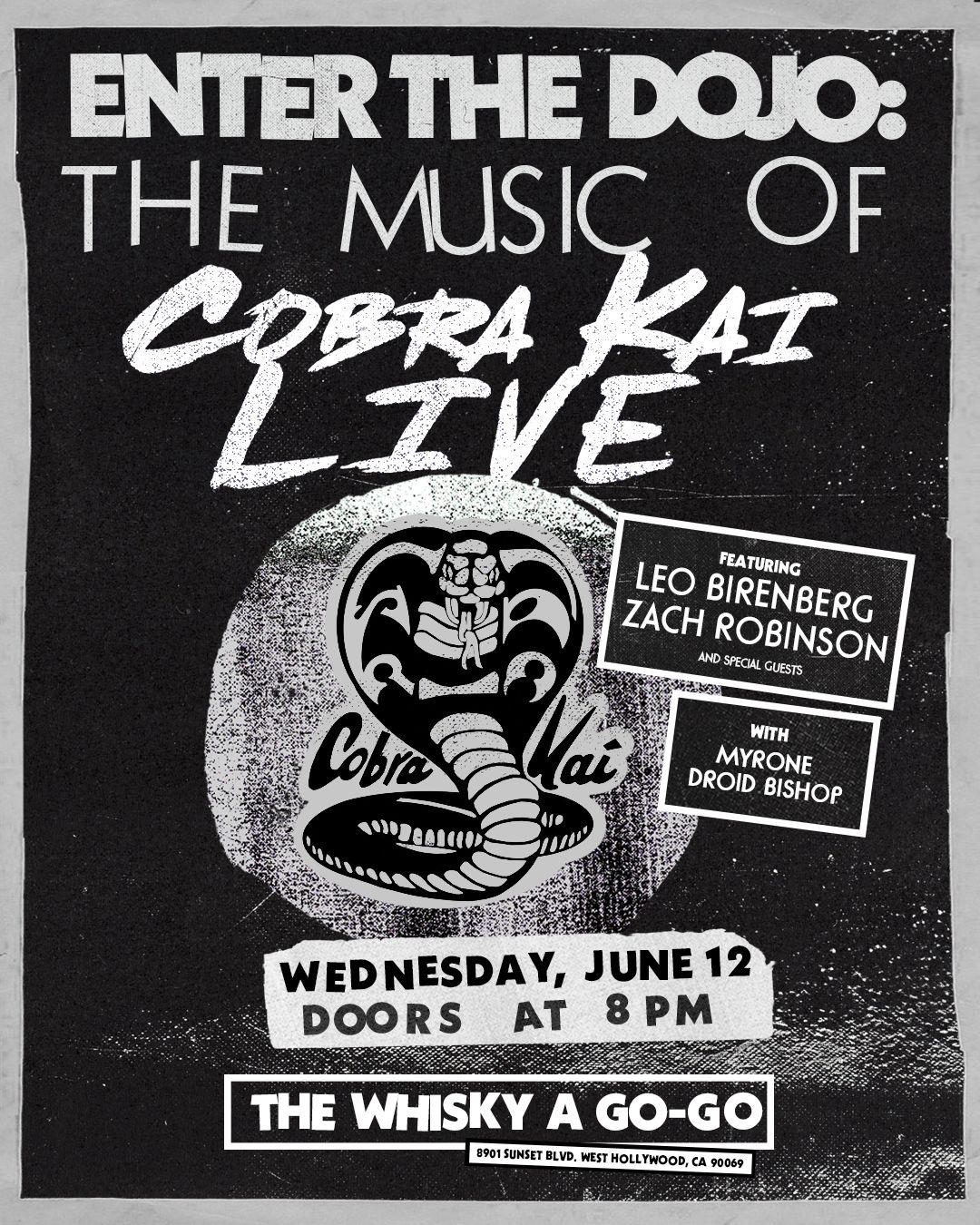 The concert will also feature opening performances by rock and synthwave musical artists Myrone, and Droid Bishop. The concert is open to all ages. Doors open at 8 p.m. PDT.

"The score for Cobra Kai was made to be played live at the Whisky. We cannot wait to shred at the venue where the Cobra Kai class of '84 frequently attended," said Robinson.

Tickets are currently on sale, and are available at $20 for general admission, $100 for a barstool table for two, and $120 for a table for two on the balcony. Whisky a Go Go is located at 8901 W Sunset Boulevard.

"One of the most fun parts of the score is that it translates from studio environment to a live band very naturally, and we are excited to share this score in a way it hasn't quite been heard before," said Birenberg.

Tickets can be purchased at https://www.ticketweb.com/event/enter-the-dojo-the-music-whisky-a-go-go-tickets/9392475.

In the highly-anticipated return of two iconic characters, the arch-rivals from the legendary Karate Kid film series reunite over 30 years after the events of the 1984 All Valley Karate Tournament. Now living in the affluent hills of Encino, Daniel LaRusso (Ralph Macchio) leads an enviable life with his beautiful family, while running a successful string of car dealerships throughout the valley. Meanwhile, his high school adversary, Johnny Lawrence (William Zabka), whose life has taken a rocky turn, seeks redemption by reopening the infamous Cobra Kai karate dojo. Their lives inevitably become intertwined and the rivalry is reignited, setting forth the next generation of "karate kids" in COBRA KAI, a YouTube Red Original Series. COBRA KAI is produced by Overbrook Entertainment in association with Sony Pictures Television.

Leo Birenberg has catapulted to the forefront of TV and film music as one of the industry's most sought-after composers. Currently, Leo's music is featured in Dreamworks' new Kung Fu Panda: The Paws of Destiny, YouTube's mega-hit series, Cobra Kai, Hulu's coming-of-age comedy PEN15, and Adult Swim's Tigtone. Working across a variety of genres and platforms, he has also scored Fox's Son of Zorn, TruTV's Adam Ruins Everything, Seeso's Take My Wife, Comedy Central's Big Time in Hollywood, FL, and the critically acclaimed documentaries In Search of Greatness and Red Army. Additionally, he has written music for the upcoming films Plus One and Staten Island Social Club,

Zach Robinson is an LA based composer, music producer, and electronic musician. Most recently, he co-composed the score for YouTube Premium's new mega-hit series Cobra Kai. The score features a 70-piece orchestra and a diverse musical palette that includes everything from synthesizers and electric guitars, to asian flutes and chamber strings. Previously, Zach co-composed and oversaw all music production for YouTube Red's first developed sitcom, Sing It! created by YouTube superstars, Benny and Rafi Fine. He collaborated with the Fine Bros again for 2017 feature film, F The Prom. Zach's other scores include the horror-comedy Bad Exorcists, racing documentary The 200 MPH Club, and the western short Born Again Sinner. He also wrote the theme song for USA Network's, NFL Football Fanatic.