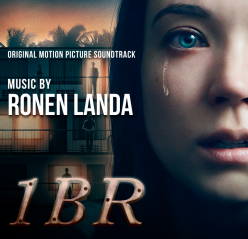 LOS ANGELES - EntSun -- Ronen Landa's original score to the upcoming horror film, 1BR is getting a digital release on April 29, 2020 by Lux/Eon Records. The film, written and directed by David Marmor, is getting distributed by Dark Sky Films on April 24, 2020. The film stars Nicole Brydon Bloom, Naomi Grossman, Giles Matthey, Taylor Nichols, Alan Blumenfeld, Celeste Sully, Susan Davis, Clayton Hoff, and Earnestine Phillips. Some of Landa's other credits include IFC Midnight's At the Devil's Door and IFC Films' The Pact, which originally premiered at the Sundance Film Festival. The score consists of 25 tracks and will be available on all major digital sites including iTunes, Spotify, Bandcamp, Amazon and Apple Music.

When discussing the 1BR score Landa says, "I'm excited to share the 1BR score— it reflects months of work alongside director David Marmor to help him tell this hair-raising story.  We dug deep to find emotional themes that could capture the essence of the drama, and set them against instrumental textures concocted with everything from contrabass woodwinds and bowed metal springs to reversed electric guitars.  It was a great opportunity to fuse the experimental and sentimental sides of my work."

More on EntSun News
The film's synopsis reads: After leaving behind a painful past to follow her dreams, Sarah scores the perfect Hollywood apartment. But something is not right. Unable to sleep, tormented by strange noises and threatening notes, her new life quickly starts to unravel. By the time she learns the horrifying truth, it's too late. Caught in a waking nightmare, Sarah must find the strength to hold onto her crumbling sanity…or be trapped forever in an existential hell.

ABOUT RONEN LANDA
Driven by the endless possibility of sound, composer Ronen Landa creates music that is stirring, inventive, and bold. The press has hailed his work as "an astounding auditory journey" (Cinema Without Borders) and a "multi-layered feast for the ears" (Review Graveyard).

Currently, Landa resides in Los Angeles. In addition to his work, he serves as Associates Board Chair for Education Through Music – Los Angeles, a nonprofit organization that ensures children attending inner-city schools can receive a high quality music education.