Devin Burrows' THE WRETCHED Score to be Released 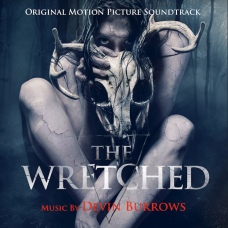 LOS ANGELES - EntSun -- Devin Burrows' score for the horror-thriller Drive-In hit The Wretched, which spent weeks at the top of box-office charts, is getting a digital release on July 17th, 2020. The album consists of 27 original tracks, including extended music not heard in the movie. The film was written and directed by Brett and Drew Pierce, with an IFC Midnight release on May 1st, 2020. The Wretched stars John-Paul Howard, Piper Curda, Jamison Jones, Azie Tespai, Zarah Mahler, Kevin Bigley, Gabriela Quezada Bloomgarden, Richard Ellis, Blane Crockarell, Judah Paul, Ja'Layah Washington, and Amy Waller. Burrows previously collaborated with The Pierce Brothers on the 2011 horror/comedy Deadheads. The score will be available on all major digital music services, including iTunes, Spotify, Amazon, and Apple Music.

When discussing the film's score, Burrows says, "It's been a fabulous journey summoning the musical witchcraft of The Wretched! I'm exceptionally jazzed that fans who experienced the film at a Drive-In and via VOD can now enjoy the score!" Critics have praised Burrows' compositions with The Hollywood Reporter exclaiming that the film is "graced by a Devin Burrows score that escalates from ominous dread into nerve-jangling haute terror." The LA Times labeled the score for the horror fairytale "unsettling."

Following his parents' separation, Ben, a rebellious teenage boy, is sent to live with his father for the summer and work at the local marina to gain some form of discipline. The idyllic tourist town offers little solace for him, however, as he is forced to deal with the local, privileged teens and his father's new girlfriend. Ben's problems grow increasingly disturbing when he makes a chilling discovery about the family renting the house next door. A malevolent spirit from the woods has taken ahold of the parents and starts playing a sinister game of house, preying upon the children and wiping any trace of their existence. Ben's suspicions of the supernatural horrors go unheeded, and he launches a perilous crusade to put an end to the skin-walking witch's reign of terror. Chilling and suspenseful, The Wretched offers a modern update to the retro young hero's mission like that of The Goonies, and promises to make viewers wary of every dark corner they encounter after witnessing its terrifying tale.

Los Angeles-based composer Devin Burrows is a rising talent in the world of film music. At 12, he began playing the guitar and the study of music theory and composition. Informed by varied influences like jazz, Hollywood scores of old, and the avant-garde as well as orchestral composers including Ravel and Stravinsky, Devin creates unique aural tapestries of visceral emotion. Though rooted in the musical traditions of the past, Devin fearlessly breaks harmonic and timbral conventions to elevate his auditory expressions. The score for The Wretched blends orchestra and folk instruments like the Sarangi with chilling, heart-pounding results. Devin has several credits for film composition and continues to push musical boundaries through film and media collaborations as well as solo projects.

Behind the music video here.