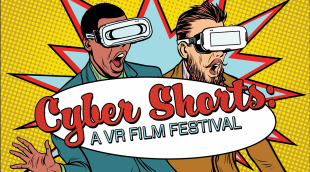 HENDERSON, Nev. - EntSun -- Cyber Shorts: A VR Film Festival returns for its second year. Festival Co-directors Darryl A. Armstrong and Shahab Zargari developed the idea to launch a film festival using the AltspaceVR platform early on during the COVID-19 pandemic in 2020. While that initial festival was quickly put together, it turned out to be a huge success with 19 films screened to an audience of over three-hundred attendees. It was covered by Movie Maker Magazine (https://www.moviemaker.com/studiofest-uses-vr-to-recreate-the-simple-experience-of-watching-a-movie-in-a-theater/) and winners were interviewed by the Feelin' Film Podcast (http://feelinfilm.com/ffplus-cyber-shorts-2020-winner-interviews/).

"The AltspaceVR platform is somewhat unique, allowing attendees to login using VR headsets—or even in a 2D mode available for PCs—and participate in a theater-like experience with other guests. This sets the experience apart from how other film festivals have approached streaming their festivals online," says Armstrong. "We really want to simulate that movie theater experience as close as possible."

More on EntSun News
Zargari, an award-winning filmmaker whose latest film, Oh, the Guilt, is in post-production said, "As a filmmaker myself, I think it is important to continue supporting the independent film community and filmmakers around the country and across the world. This event allows directors, producers, writers, actors, and everyone involved in the filmmaking process the ability to interact with audiences in a way that resembles the traditional film festival experience."

The 2021 festival will be held on Saturday, May 1 on the AltspaceVR platform and will include approximately two hours of films along with one hour for a Q&A session with filmmakers. Attendance is again free this year, however it is recommended that attendees register beforehand. The time, program, and registration link will be published on the festival's website at https://cybershorts.online/ as well as announced on the festival's Twitter and Facebook accounts. (NOTE: you do not need a VR headset to join the screening. All you need is to download the AltSpaceVR app on a PC to access 2D mode.)

More on EntSun News
Film submissions for the 2021 Cyber Shorts Film Festival are being accepted now through FilmFreeway (https://filmfreeway.com/CyberShortsaVRFilmFestival). The regular deadline to submit a short film in February 1, 2021. A late deadline has been set for March 1, 2021. Official selections will be notified by April 5, 2021.

Entries are open to short films under 15 minutes—nothing racist, sexist, or homophobic. International films are welcome but must be subtitled in English if they are in another language. Music videos and animations are also welcome.

Three awards will be given: For Best Film, Best Director, and Best Screenplay.

Cyber Shorts is made possible by the volunteer staff of Rise Up Daily.