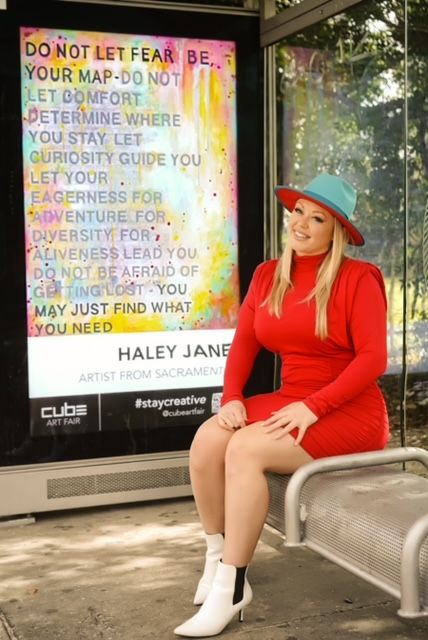 NEW YORK - EntSun -- This year's virtual Art Basel featured none other than designer and creative Haley Borchers known as Haley Jane, a gifted designer and creative artist from Sacramento, California whose signature designs have been captured on stages, fashion shows, television and murals. Her signature pieces have been worn by some of the industries biggest entertainers and several retail stores across the states. After Art Basel was shuttered due to the pandemic, Cube Art Fair provided a creative alternative for artists to share their works with the public in a way that is safe and accessible to all. Cube Art Fair launched their public art fair December 1st-6th, 2020. Showcasing established and emerging artist talent on 50 or more billboards located throughout the city and Haley Jane was one of the most sought after featured artists.

Haley Jane studied in Paris, France where she was able to study the great artists of the past such as; Rodin, Leonardo Da Vinci, Picasso, Monet, VanGogh, etc. Haley Jane was inspired to start doing hand painted clothing and jackets for musicians such as Erykah Badu, E40, Ghostface from Wu Tang clan and paintings for top model Tyra Banks.

More on EntSun News
While working hard, designing signature garment pieces for local fashion shows and being a full time single mom Haley's style of painting and fashion evolved to where it is today. Haley defines her artistic creativeness as "pop art mixed with some occasional abstract and surreal elements". Haley created two different brands, Haley's Art, and Dreamworld Clothing. Haley's Art is her original art, art prints of her work and her art printed on T-shirts. Haley Jane has been able to place Dreamworld clothing on such artist as reality star Toya Bush-Harris of Bravo Television's Married 2 Medicine in which Toya wore one of Haley's signature T-shirt's on an episode of Married 2 Medicine which has generated a few request for Haley to design other shirts for a few of the cast members. Haley was also asked to design a special T-shirt for rap icon Ludacris who wore her shirt onstage and showcased her brand as well as super producer Jazzy Pha and R&B singer Lil Fizz from the all male band B2K, and many more.

Haley Jane was fortunate enough to showcase 14 paintings at the Scope International Contemporary Art Show on the sands of Ocean Drive in Miami which were the focal points for display. Haley also showcased her artwork at the Scope International Contemporary show in New York which she has gained nothing but praise for her artistic work and style. Haley's Dreamworld designs have been in several clothing conventions this year, Magic Clothing Convention in Las Vegas, Magical Digital convention and Cobb Clothing Convention in Atlanta, Georgia. Dreamworld Clothing is currently in 15 stores across the U.S. and British Columbia, 3 stores in Memphis, TN; Victoria, BC; Miami, FL; Los Angeles, CA; Elucid, OH; and Indianapolis, IN just to name a few. Haley's passion is to inspire people to follow their dreams, whatever they may be.