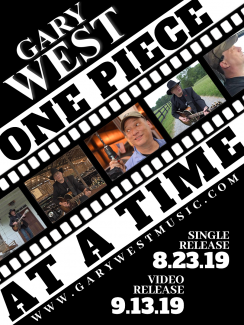 NASHVILLE, Tenn. - EntSun -- Country star Gary West's management has announced the upcoming release of the single and video for the Johnny Cash song "One Piece at a Time." The single's release date is August 23, 2019, and the video is scheduled for Vevo's platform on September 13, 2019.

Covered by Cash in 1976, the song reached the number one position on Billboard's "Hot Country Singles," his last song to attain this ranking. The song describes a man who builds a Cadillac without cost from his vantage point working on the GM assembly line. Over 25 years, he squirrels away each component in an oversized lunchbox and a co-worker's motorhome. The result is a hodgepodge vehicle comprised of parts from various years and models, presenting a titling nightmare.

West filmed the video at Storytellers Museum and Hideaway Farm (9676 Old Highway 46, Bon Aqua, TN). The property, owned by the Oxley family, features the farm that served as Cash's retreat from his hectic public life. The Oxleys lovingly restored the site, creating a tranquil ambiance where visitors can experience the place that Cash referred to as "The center of my universe." The video (filmed by Alex Morgan) includes the prototype of the "One Piece at a Time" Cadillac, which is housed on-site.

More on EntSun News
States the Oxley family, "Gary has been a great friend to the Storytellers Hideaway Farm and shares our passion for preserving this historical Farm and Museum. We were thrilled that we could be a part of supporting this project and know fans will love hearing Gary's version of 'One Piece at a Time.'

West's rendition expertly conveys the story, infused with hauntingly familiar Cash nuances. The video chronicles the "Psycho-billy" car-creation, with the entertainer colorfully unfolding the tale; punctuated with his famous comedic flair. Although the video will garner a giggle, West maintains the integrity of the song while paying homage to "The Man in Black."

West shares, "To me, this is what country music today is missing…an entertaining song that tells a story. Much like a mini-movie, the video draws you in. I predict that you won't be able to turn it off till you find out how it ends!"

The single will be available on digital platforms and West's album "Heroes, Friends, & Legends – For the Love of Cash, Vol. 3." The album also features West's original music plus the iconic Cash-Carter song "Jackson." Lending vocals to "Jackson" is Leona Williams, ex-wife of Merle Haggard and respected singer-songwriter who wrote some of his biggest hits.