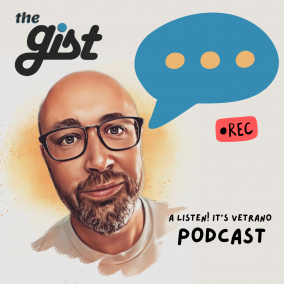 The entertainment and lifestyle writer launches a pop culture podcast called 'The Gist' as an extension of the popular entertainment website, 'Listen! It's Vetrano'
NASHVILLE, Tenn. - EntSun -- Chris Vetrano, Nashville-based Founder of the popular lifestyle and entertainment website Listen! It's Vetrano (http://listenitsvetrano.com/), launched The Gist, a new weekly pop culture focused podcast aimed at bringing the days of water cooler conversation to the 'streaming-sphere.'

The Gist is an unfiltered series that delivers Vetrano's snappy, and sarcastic, take on everything happening in entertainment news, interviews with special and celebrity guests, and retellings of the most pivotal moments of pop culture's past. New episodes will be released weekly on Thursdays with short impromptu episodes released as breaking news dops. The podcast, officially launching today, already has four episodes available to stream wherever podcasts are available (stream on Spotify, Apple Podcasts, Amazon, and more). The first few episodes feature Vetrano's Top Ten moments of 2022, reactions to breaking news stories from The Real Housewives franchise, 2023 television casting news, and a conversation with Grammy nominated recording artist, Cassadee Pope.

More on EntSun News
The Listen! It's Vetrano website will continue to include editorial style interviews with celebrities, musicians and industry leaders, as well as features on the best in food, fashion and travel. Based in Music City, the site also highlights the best that Nashville has to offer for locals and travelers alike. The site has already generated more than 100K views and 65K unique visitors, has been recognized by celebrities, including Taylor Swift and Justin Timberlake, and is now home to The Gist.