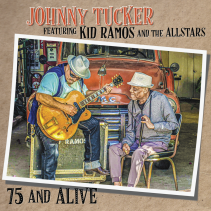 A HighJohn Records production featuring Kid Ramos and The Allstars
MEMPHIS, Tenn. - EntSun -- Blue Heart Records is pleased to announce the forthcoming release from Johnny Tucker. Born into a large sharecropping family, the Fresno, California native was introduced to music by his father, who played guitar and sang. Tucker was drawn to the percussive sound of pots and pans, using them to hone his skills until getting his first band gig. Eventually graduating to a real drum kit, Tucker along with several of his brothers, chose to pursue music, bringing home their earnings to help support the family. After moving to Los Angeles in 1964, Tucker's big break happened when blues guitarist Phillip Walker hired him on drums. Hired because he could both sing harmonies and play drums, Tucker remained with Walker for decades, touring the world and performing on parts of Walker's acclaimed album, The Bottom of the Top.

It wasn't until 1997 that Johnny Tucker made his own recording debut, with fellow vocalist James "Broadway" Thomas. Not long after that, he met Robert Auerbach, president of HighJohn Records, and released Why You Lookin' At Me (2002) for his label debut. Years later, his sophomore release, Seven Day Blues (2018), followed. Recipient of a Global Music Award Silver Medal and semifinalist in the 2018 International Songwriting Competition (title track, "Seven Day Blues"), the album was also a critics' favorite. Now, having reached a milestone birthday on October 17, 2020, which also happened to be the day the album was recorded, Tucker is set to release his new opus, 75 and Alive, again on the HighJohn Records imprint this time in partnership with Blue Heart Records. Auerbach selected Kid Ramos to produce this collection of twelve originals. Ramos assembled The Allstars band, featuring Carl Sonny Leyland, John Bazz, Jason Lozano, Bob Corritore and Ron Dziubla.

More on EntSun News
"Well this guy (Auerbach) is just a really wonderful guy and he wanted me to record Johnny Tucker. I put together some musicians, you know we went into the studio, we cut 32 tracks in 2 days. Yeah, I mean it was a crack band, the band was just perfect man. I just called out different grooves, different things, and we just started lettin' it roll." – Kid Ramos (Blues Blast Magazine, 5/13/21)

"Working with Bob Auerbach on Johnny's Seven Day Blues was one of my highlights in 2018," says Betsie Brown, partner at Blue Heart Records. "So, it's no surprise I am delighted we're working the new project in partnership with HighJohn Records."

According to Robert Auerbach, HighJohn Records, "Working with Johnny Tucker for the past 15 years has been an amazing experience; one that only gets better with time. I love this album!"

"There is no doubt that Johnny Tucker is the star here. … Seven Days Blues is an exemple of the still vital and much appreciated old school style. This potential contender for Traditional Blues Album of the year sounds like it was a lifetime in the making because it was." - Blues Music Magazine

More on EntSun News
"The term 'Real Deal' is used far too often…so often, in fact, that it has lost all meaning. In this case, however, it does apply. Johnny Tucker is every bit the real deal." – Reflections in Blue

Publicity and Promotion by Blind Raccoon