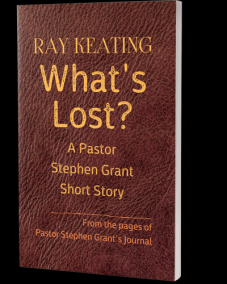 Gripping Tale Told in Pastor Stephen Grant's Own Words from His Journal
DAVENPORT, Fla. - EntSun -- What's Lost? A Pastor Stephen Grant Short Story is an edge of-your-seat page-turner by Ray Keating that is torn from the pages of Grant's own journal.

Pastor Stephen Grant tells a riveting mystery involving deception, betrayal, sacrifice and friendship, along with plenty of action and questions about what we truly can know about others. Grant takes us on a personal journey across decades and around the world, from Long Island to Vietnam.

This is the second Pastor Stephen Grant thriller by Ray Keating told from Grant's own viewpoint, unfolding each day in the pages of his journal.

In a 4-star review of What's Lost?, Self-Publishing Review said, "The Pastor Stephen Grant universe grows a bit wider and more fascinating with Ray Keating's latest short story release. This gripping tale of deception, retribution, and redemption is filled with espionage, action, and a good deal of enticing mystery. Keating's original twists and singular protagonist result in another solid ride."

Ray Keating said, "Like Past Lives, What's Lost? is an adventure written from a first-person point of view. Grant tells the story through his journal entries. And while this is a 'short story,' it's packed with action, mystery and revelations about relationships."

Paperbacks and the Kindle edition of What's Lost? A Pastor Stephen Grant Short Story are at Amazon via https://www.amazon.com/dp/B094GQN6PG and signed books are at https://raykeatingonline.com/products/whatslost.

Review copies, and author interviews and appearances are available upon request.