Those Hilarious & Bizarre 'Florida Man' Stories Are Coming to Comics 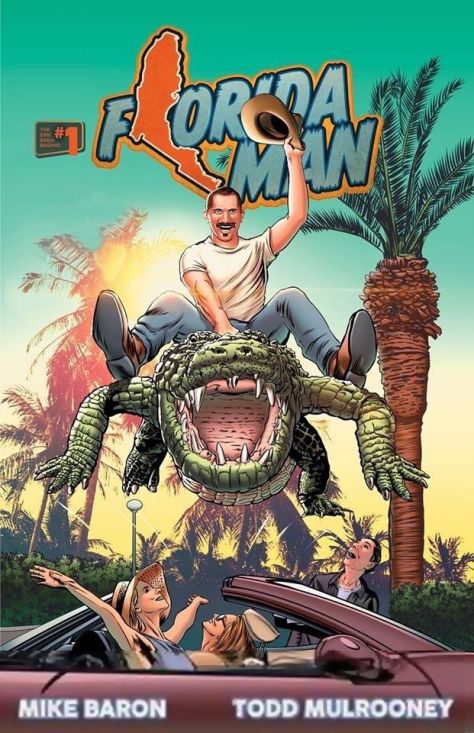 Eisner Winner Mike Baron Smashes Fundraising Goal to Launch His Newest Funny Book
ORLANDO, Fla. - EntSun -- Multiple Eisner Award winning writer Mike Baron announced today that he is thrilled with the response to his crowdfunding efforts for his upcoming Florida Man graphic novel, illustrated by Todd Mulrooney. The team's Indiegogo crowdfunding campaign quickly hit its modest goal and is already at over 300% fully funded with just over two weeks to go in the campaign.

"This comic is going to blow peoples' minds," Baron said. "It's probably the funniest thing I've ever written and the story practically writes itself. There's an unlimited amount of untapped, bizarre adventures I get to tell with this character and his friends!"

Baron, who has written for both Marvel Comics (Punisher, Star Wars) and DC Comics (The Flash) has successfully created his own independent comic properties in the past with titles such as Nexus and Badger, which often times sold as well as the X-Men and Spider-Man books, but more recently he's been writing prose novels which is where the Florida Man character "Gary Duba" was first published. Now Baron is making his triumphant return to comic books with what many critics have described as a "Rube Goldberg Machine" style of humor comic.

More on EntSun News
"It just builds and twists and the payoff is immense," added Chris Braly, the project manager and editor. "Mike is such a talented guy, and his ability to write comics in a well-paced, very clever style has been sorely missed in today's modern comics. I think grown-ups who still like to read funny books are really going to be thrilled with this one!"

The book is available on the official Indieogogo page by searching "Florida Man Graphic Novel" at indiegogo.com and is due out in the fall.