This June, thousands will discover what Life in the Doghouse is really like 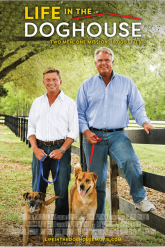 Life in the Doghouse, the feel-good documentary about two men who rescued over 10,000 dogs (yes, 10,000, that is not a typo), celebrates its one-year anniversary with a month-long celebration. Viewers will get an inside look at Danny Robertshaw and Ron Danta's life in the "doghouse" where they care for rescue dogs before finding them forever homes.
CAMDEN, S.C. - EntSun -- Ten thousand tails wagging may not make a sound, but the collective impact of that many happy dogs who would not have survived if not for Danny & Ron's Rescue, is enormous! The award-winning documentary Life in the Doghouse, which chronicles Danny Robertshaw and Ron Danta rescuing 10,000 homeless dogs destined for euthanasia, celebrates a year on Netflix this month.

The documentary's candid depiction of the duo's ups, downs, laughs and tears as they take home abandoned and otherwise unwanted dogs and care for them as their own until suitable new owners are found, has been delighting dog lovers everywhere.

"People just keep watching it," says the Danny half of Danny & Ron's Rescue. "It's been in theatres. It's available to stream online. Folks are having big watch parties. Despite the over 4,000 dogs euthanized daily in the U.S., there are—thank goodness—a whole lot more people who feel passionately like Ron and I do."

More on EntSun News
Indeed, the immense continued interest in watching Life in the Doghouse would indicate that huge numbers of dog lovers empathize with the plight of man's best friend being dumped in the thousands every year at kill shelters. Few people, however, have the fortitude required to take home 10,000 of them over 10 years as the movie depicts, a benchmark that has risen to near 12,000 since filming. Fortunately, you don't have to go to the lengths of Danny and Ron to immerse yourself in a little of the unconditional love—times 10,000—that these two superheroes have lived and continue to live right now. You just have to curl up on your sofa and stream Life in the Doghouse via Netflix, iTunes, Amazon, Google Play or Microsoft.

Danny and Ron bring these animals first into their own home because neglected and abused dogs, they say, recover and trust again much more successfully in a loving home. With help, they care for each and every one of their rescue dogs both physically and emotionally until they're ready to be saved. Currently, Danny and Ron have increased the "10,000 dogs saved" benchmark depicted in the movie to near 12,000.

Source: Life in the Doghouse Movie