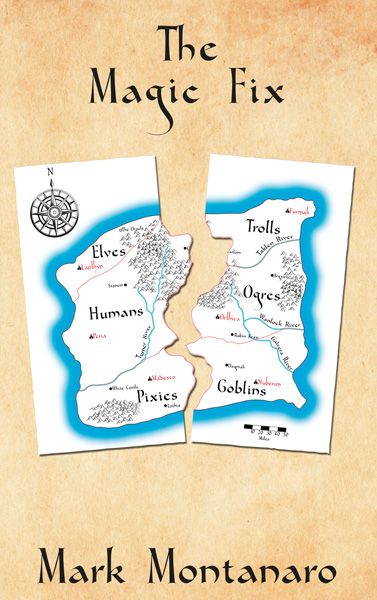 "Did we win the battle?" asked King Wyndham. "Well it depends how you define winning," answered Longfield, one of the King's royal commanders. So starts The Magic Fix, a satirical tale with a cast of mythical characters, by author Mark Montanaro.
DARTFORD, U.K. - EntSun -- Elsewhen Press, an independent UK publisher specialising in Speculative Fiction, is delighted to announce the publication of The Magic Fix by Mark Montanaro. Epic fantasy in the grand tradition of Craig Shaw Gardner, Terry Pratchett, Tom Holt and others, Mark Montanaro shines a satirical spotlight on prejudice, authority, power, destiny and the futility of conflict. Set in a fictional continent (The Known World) peopled by Humans, Elves, Pixies, Trolls, Goblins and Ogres, where a pointless war is polarising the races, short-term ambition is blinding leaders to imminent danger, and narrow-minded thinking leaves them all open to the ravages of a natural disaster. Sound familiar?

In The Known World, the Humans are fighting a losing battle with the Trolls. Meanwhile the Ogres are up to something, which probably isn't good. Could one flying unicorn bring about peace in the Known World? No, obviously not. But maybe a group of rebels have the answer. Or perhaps the answer lies with a young Pixie with one remarkable gift. Does the Elvish Oracle have the answer? Who knows? And, even if she did, would anyone understand her cryptic answers (we all know what Oracles are like!) The Known World is in danger of being rent in twain, and twain-rending is never good! Did we mention the dragon?

More on EntSun News
Editorial director of Elsewhen Press, Peter Buck, said: "At a time when our world is being ravaged by a natural disaster and leaders' inability to lead, the need for escapist wit has never been greater. Mark's 'Known World' is also undergoing a natural disaster (a dragon) as well as a failure of leadership. Too close to home? Well at least it will make you laugh."

The Magic Fix is available from today in eBook format and will be available in paperback from 30th November 2020.

Notes for Editors
About Mark Montanaro
Mark Montanaro has always been a man of many talents. He can count with both hands, get five letter words on Countdown and once solved a Rubik's cube in just 5 days, 13 hours and 59 minutes.
His creativity started at an early age, when he invented plenty of imaginary friends, and even more imaginary girlfriends. As he got older, he started to use his talents to change the world for the better. World peace, poverty reduction, climate change; Mark imagined he had solutions to all of them.
He now lives in London with his Xbox, television and non-imaginary girlfriend. He has recently embarked on his greatest and most creative project yet: a witty novel set in a fantasy world. The Magic Fix, Mark's debut book, is set to be his best work so far.