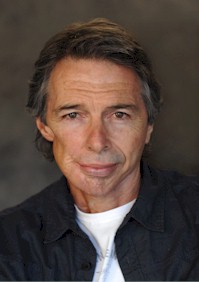 Bestselling author, James Houston Turner, known for his Aleksandr Talanov series of spy thrillers, has written and will help produce Square Pegs, a family drama feature film about a court battle between a pastor and his bartender daughter.
AUSTIN, Texas - EntSun -- Being the proverbial "square peg in a round hole" is a theme James Houston Turner explores in Square Pegs, a film script he's written that breaks stride with the spy novels he normally writes. The movie will begin filming in Georgia in early 2022.

The story centers on a court battle between pastor Mac McCoy and his bartender daughter, Jodie. Their bone of contention is the accidental death of Jodie's mother and Mac's wife, Meredith, with each blaming the other for what happened. On their appointed day in court, the two are called into the judge's chambers, where they break into another argument of back-and-forth shouting, with each denouncing the other as having no clue about what it's like to "walk in my shoes." Neither is willing to listen, forgive, or even attempt to understand the other. So the judge orders them to swap roles for a week. Mac must tend bar and live on tips, and Jody must run the church.

More on EntSun News
"I didn't want Square Pegs to be heavy-handed or a sermon," Turner explains. "I wanted it to be real and often lighthearted for this pair of 'square pegs' finding their way back together thanks to a pair of feisty judges who push them out of their comfort zones."

Award-winning actress Meggie Jenny, who will play the role of Jodie, says she was drawn to the script because of the way it depicts Jodie and her father deflecting the real issue of their grief with the blame game. Adds Turner, who will help produce the film: "Meggie has garnered three acting awards plus an additional six nominations. I'm ecstatic that she's part of this, because she will bring her powerful acting talents to a role that requires a delicate balance of comedic moments with raw emotion."

Bill Rahn, of Tri-Rahn Pictures, who will direct as well as help produce, says Square Pegs grabbed his interest because it's an authentic mix of faith, humor, and human drama. "I look forward to bringing it to life."

More on EntSun News
Square Pegs will be produced by Ruby Rock Films and Tri-Rahn Pictures.
More information may be found on the Square Pegs Official Facebook Page.

A native of Kansas who now lives in Texas after twenty years in Australia, James Houston Turner is a cancer survivor of more than thirty years. He received his bachelor's degree from Baker University and his master's degree from the University of Houston Clear Lake. His novels have won numerous awards, including "Best Thriller."