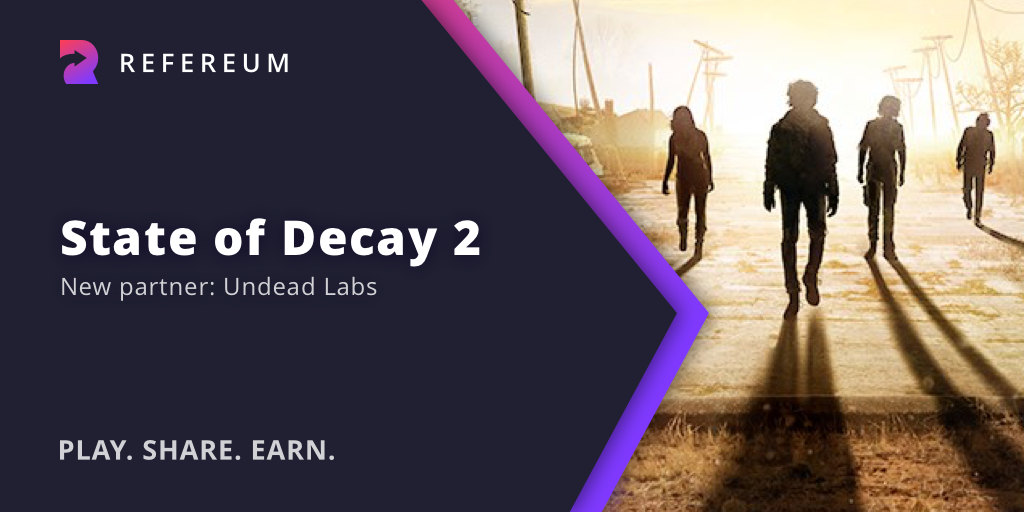 Players will be able to earn rewards exclusive to Refereum — including five different weapon and supply packs containing melee weapons and vehicles with eye-catching custom paint jobs. Gamers will not be able to get these packs anywhere else! Players can also earn the new Heartland expansion pack for Xbox or PC valued at $9.99 USD, or RFR tokens, which can be used on Refereum.com to unlock games and in-game content.

For a chance to earn these rewards, players simply need to sign up for a free Refereum account and complete State of Decay 2 "quests" on Refereum.com. These include streaming their State of Decay 2 gameplay on Twitch or Mixer, watching other players' streams, joining Undead Labs' Discord server, and more. Top players who earn the most points for completing these quests will earn rewards!

About Refereum
Refereum is on a mission to reward players' passion for gaming by helping developers market their game. Everybody wins.

Founded by a team of game industry veterans, Refereum offers an innovative way for members of any gaming community to connect and earn rewards for their influence. For more information, please visit Refereum.com. If you're a game developer or publisher interested in partnering with Refereum, please email partners@refereum.com.

About Undead Labs
Undead Labs is an Xbox Game Studio focused on blending emotional narratives and dynamic systems into compelling gameplay. Undead Labs are the proud creators of the State of Decay franchise, which offers millions of eager players the opportunity to explore how they would survive the inevitable zombie apocalypse.