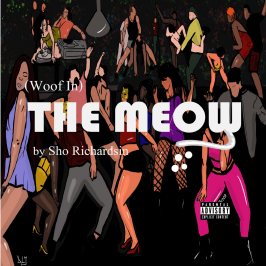 For 'The Meow' The songwriter teamed up with Bangladeshi music producer Ariful Haque (aka Matrix Beats) to concoct an 808 heavy upbeat club anthem. The Meow draws on a mixture of the Rap, Caribbean, and World music genres to deliver a melodic masterpiece.

The song incorporates a colorful blend of hip hop and dancehall lyricism that allows the audience to just relax and catch a vibe. Sho has been hard at work creating waves in the underground music scene. Over the past 2 and a half years he has released two Mixtapes, an EP, various freestyles, and other collaborations.

More on EntSun News
Recently Sho revealed that during the pandemic he adjusted his strategy by sharing and creating free versions of all songs via IGTV and Facebook video. When asked the reason for the shift,  he jokingly responded.

"Last year I pivoted just like everyone else, I gave away 25+ songs meant for sale. You are going to buy these next five. All jokes aside, everyone needed an escape" - Sho Richardsin

Listeners can tune-in to Bandcamp on Friday, February 12th, 2021 then their favorite streaming service starting Monday, February 15th, 2021. To listen to the full song The Meow (Woof In) visit: https://www.shorichardsin.com/2021/02/new-music-the-meow.html.

Sho Richardsin is a St Vincent and the Grenadines born recording artist, songwriter, and producer. He has worked with a variety of upcoming artists in many capacities including marketing, production, engineering, and artist development. Sho now has over 25,000+ streams and climbing on Spotify, Apple Music, and other streaming services.