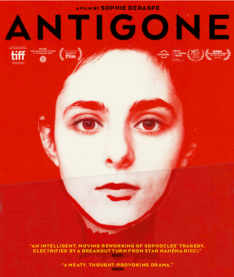 • 'Antigone', modern adaptation of classical greek tragedy, plays with opening ceremony
• Evening starts at Lincoln Center's Elinor Bunin Munroe Film Center with 'A Call for Peace'
NEW YORK - EntSun -- In view of the pandemic of Coronavirus (COVID-19) and the closing of our venues, the festival has been postponed to a later date possibly in fall 2020. Stay healthy everyone!

'Antigone' writer-director Sophie Deraspe's incisive adaptation of the Greek tragedy by Sophocles is the daring story of one young woman's commitment to her family, by sacrificing herself. The film deftly incorporates urgent and explosive contemporary questions of immigration, belonging, social media, identity, and the power of idealism. Trailer here.

More on EntSun News
Also showing on opening night is Juan C Borrero and Melodie Carli's documentary, 'A Call for Peace', with the directors in attendance. The film takes the viewer around the world to unravel many intriguing questions and reveals a previously unseen view into the work of notable peace-builders responsible for transforming conflicts around the world. The evening is capped by an invitation-only reception. Few tickets are available. Trailer here.

SR Socially Relevant™ Film Festival New York, is a 501 (c) 3 non-profit film festival founded in 2013 by actress/filmmaker Nora Armani as a response to the proliferation of violence and violent forms of storytelling, and to honor the memory of a violent attack against members of her family who lost their lives.

More on EntSun News
SRFF's mission is the promotion of films and filmmakers that deal with socially relevant film content. In its first six years, the festival has successfully served as a platform for 350 films from 35 countries and presenting over 40 awards to deserving talented filmmakers from around the world. SRFF believes that positive social change can happen through the impact of Socially Relevant™ films.