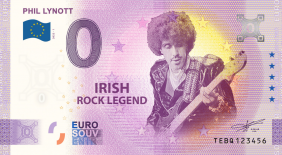 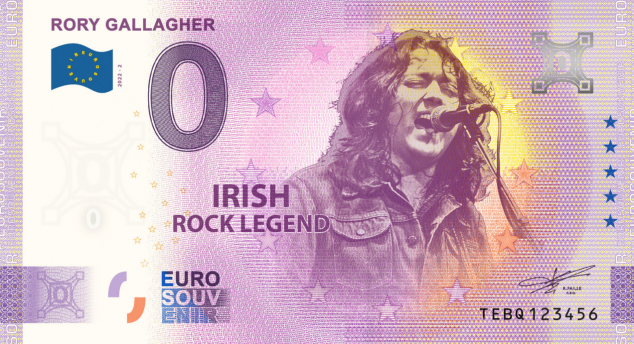 Thin Lizzy co-founder and "The Ace with the Bass" Phil Lynott and Irish blues-rock guitar icon Rory Gallagher will each receive the posthumous title of "Irish Rock Legend" on their respective limited-edition zero Euro notes, printed by Euro Note Souvenir. The company has previously honored other iconic Irish mainstays, including the city of Dublin, revolutionary Irish politician Michael Collins, Kilkenny Castle, and the Cliffs of Moher.

More on EntSun News
Phil Lynott
Decades after his death, Thin Lizzy co-founder Phil Lynott is still a beloved musician in Dublin, where he was raised. A statue to honor the frontman was erected in Lynott's memory in 2005. Lynott drew heavily on his working-class Irish roots in his songwriting and poetry, which were as much a part of the soul of groups like Thin Lizzy as his inimitable bass rhythms. His work with the group influenced generations of musicians, from Metallica to Mastodon to Smashing Pumpkins. His untimely death in 1986 at age 36 of pneumonia and blood poisoning sent shock waves through the Irish music scene, and his memorial led to the creation of the Vibe for Philo music festival.

Rory Gallagher
Rory Gallagher was a true blues guitar great, widely regarded as one of the great "play what you feel" guitarists of his age. He sold more than 30 million albums in the 1970s, touring constantly and delivering powerhouse live shows that often resulted in marathon sets. A true "musician's musician," Gallagher performed on albums with musical legends from Muddy Waters to Jerry Lee Lewis. He died in 1995 from liver failure as a result of medication, and his Dublin grave features a depiction of his 1972 "International Guitarist of the Year" award.

More on EntSun News
"Both Phil Lynott and Rory Gallagher charmed the world with a musical style that was steeped in their Irish upbringing," said Peter Schneider, Founder of Euro Note Souvenir. "They inspired countless musicians with their passion and their skill, and they truly deserve to be remembered as Irish Rock Legends."