M.King Media Invites You to "Motivate '22" This September 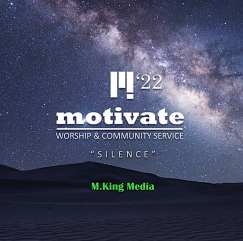 1st Part of Our Event
The 1st part of the event is Worship, an interview with someone interesting in the faith, and then a sermon/teaching on the year's theme by M.King. "This year's theme is "Silence. It's funny how when it seems like the Lord is the quietest and the least present, He is behind the scenes doing more than we could ever imagine or conceive," said M.King.

2nd Part of Our Event
The 2nd part of the event encourages viewers to step out of their comfort zone and help someone in a special way. "However, God is leading our viewers' hearts to give, that's what we want," said M.King.

More on EntSun News
2022 Community Service Project
In years past M.King Media has helped a homeowner clean their yard, bought food for countless people at a Chick-fil-a, and even contributed to a local food bank, but this year is going to be different. " This year we want to include our subscribers. We want to do something that will allow them the ability to not just hear about what we're doing, but allow them to team up with us and do this together," said M.King.

To become a subscriber to M.King Media simply go to the official Motivate '22 page and subscribe for free.

About M.King Media:
M.King Media INC. is a faith-focused non-profit based in Mesa, AZ. Founded in 2013, M.King Media has created more than 234 media projects and distributed them all over the world. M.King Media's mission statement is "To Make Creative Christian Media That Point People to Jesus Christ. " For more info go to mkingmedia.com