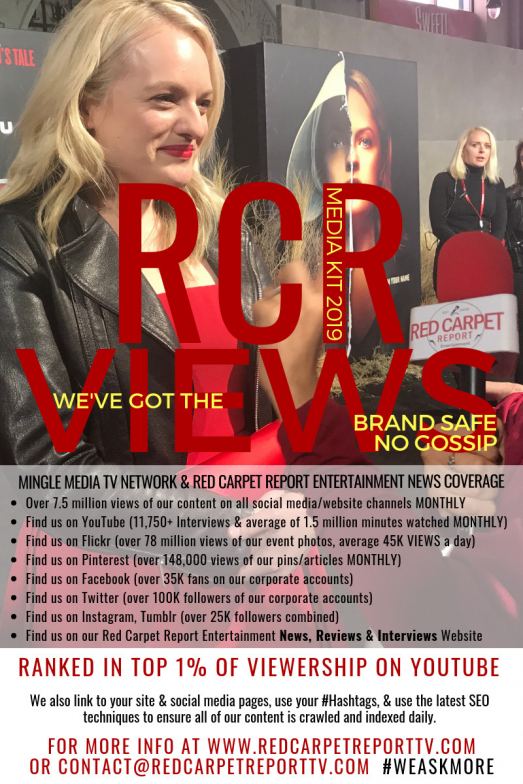 Outlet touts focus on content without gimmicks or gossip when interviewing Entertainment Professionals above and below the line.
MARINA DEL REY, Calif. - EntSun -- Today, Mingle Media TV announced they have exceeded 12,000 video interviews since their launch of Red Carpet Report, a digital interactive media outlet focused on Television and Film industry news and professionals. Additionally, the outlet reports that they have had over 81 million minutes of content watched on their YouTube channel, which is no easy feat, as they focus only on the subject for their interviews, avoiding gimmicks, uncomfortable topics or gossip when talking to talent on red carpets, set visits or junkets.

"We believe in respecting the talent who walk the red carpet by talking to them about their involvement, not gotcha questions or tabloid gossip," said Stephanie Piche, Executive Producer at Mingle Media TV. "Additionally, in our reviews, we focus on presenting a neutral review of the Television show or Film as art is subjective and our reviews respect the project and creators. So many times, we have read bad reviews in advance to watching the content and felt misled because we did enjoy it and do not want to contribute with negative reviews to deter others to watching content they find of interest."

Mingle Media TV's Red Carpet Report covers award season events from Oscars to Television Academy's Emmys among others, speak with talent on red carpets, on set visits, junkets and more. Their crews are also entertainment professionals from award-winning actors, writers, hosts, and reporters so they get it, and respect the work. They also boast a number of 'genre-specific nerds' who can talk turkey about Marvel and DC comics, science, mysteries and more.

"We try to match our entertainment reporters/hosts to the event so that their research and passion about the subject yields interesting interviews that the fans will enjoy watching," said JD Piche, Producer, Red Carpet Report. "We take also pride in connecting with the talent without putting them or their PR representatives on edge because they know we will not ask an off-topic question."

Mingle Media TV's Red Carpet Report is known for its transparent support of projects that they cover and collaborate with the studio, PR or organization to ensure that any interview they do will not be an embarrassment for any of the subjects doesn't cross the line for unsafe topics and meets Mingle Media TV Entertainment's commitment to 'ask more' and be 'brand safe.'

More on EntSun News
Mingle Media TV is the worldwide leader in digital entertainment news and can be seen in over 124 countries on their YouTube channel at www.redcarpetreporttv.com