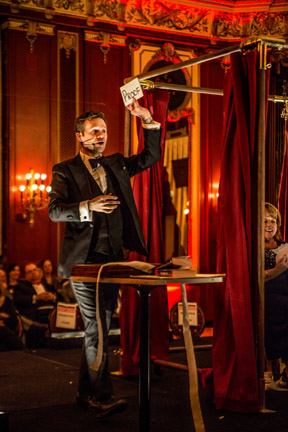 Third-generation magician Dennis Watkins conjures playful spirits from the beyond during his original adaptation of The Spirit Cabinet and more during an exclusive performance, "Dennis Watkins' Magic, Mysteries, and Spirits" on October 26.
CHICAGO - Oct. 2, 2018 - EntSun -- Chicago's top magician and mentalist, Dennis Watkins, will perform his original adaptation of magic's most intriguing spiritual mystery, The Spirit Cabinet, and more in a one-night-only event at The Palmer House on Friday, October 26 to celebrate National Magic Week. The annual holiday was founded in honor of the late, great American magician Harry Houdini, who Watkins has portrayed on numerous occasions. With help from the beyond, Watkins promises to look into the minds of his audience to see what they see during his exclusive performance of Dennis Watkins' Magic, Mysteries, and Spirits, produced by The House Theatre of Chicago.

"We know that human beings are mysterious creatures who communicate in mysterious ways," says Watkins who has performed nearly 1,000 shows in his weekly production, The Magic Parlour. "While we all understand that human beings cannot teleport or fly, we secretly hope that it might be possible to be psychic," he adds.

As a lifelong magician, Watkins recalls watching the legendary Frances Willard and Glen Falkenstein perform the Spirit Cabinet as it had been passed to Frances by her father, the legendary Willard the Wizard.  On this very special night, Watkins will perform his version of this spiritualist spectacular and harness the collective mental energy of everyone in the room.

More on EntSun News
A cocktail hour inside the Palmer House Hilton's stunning Red Lacquer Room welcomes guests before the third-generation magician takes the stage for a 90-minute premiere performance. Watkins will call upon ghosts to make themselves known to the gathered crowd, inspiring wonder as guests participate in revealing the playful connections to the beyond.

Those unable to attend can enjoy Watkins' performance during his signature show, The Magic Parlour, scheduled five times weekly inside an elegant salon at the Palmer House Hilton.

ABOUT THE MAGIC PARLOUR, PRODUCED BY THE HOUSE THEATRE OF CHICAGO
The Magic Parlour is an intimate evening of classic magic and mind-reading starring third-generation magician Dennis Watkins. Guests to this intimate, magic-packed evening gather at Potter's in the Palmer House lobby before Watkins personally escorts them to the performance space. Once inside, the audience participates in much of the performance as Watkins wows the room with classic sleight of hand, unbelievable mind-reading and magical wisdom passed down from his grandfather.

More on EntSun News
Since opening at The Palmer House on New Year's Eve of 2011, Dennis Watkins' performance of The Magic Parlour has enjoyed phenomenal success and unimagined growth.  With only 44 seats available per show, The Magic Parlour has entertained over 20,000 guests in its seven-year run.  Additionally, it has hosted more than 800 ticketed audiences and dozens of private groups, facilitated three truly magical wedding proposals, and has been featured in two books (Chicago Magic: A History of Stagecraft and Spectacle and 100 Things to do in Chicago Before You Die).

ABOUT THE HOUSE THEATRE OF CHICAGO, PRODUCER OF DENNIS WATKINS' MAGIC, MYSTERY, AND SPIRITS
The House is Chicago's premier home for intimate, original works of epic story and stagecraft. Founded in 2001, led by Artistic Director Nathan Allen, and driven by an interdisciplinary ensemble of Chicago's next generation of great storytellers, The House aims to become a laboratory and platform for the evolution of the American theatre as an inclusive and popular art form.

Since becoming eligible in 2004, The House has been nominated for 70 Joseph Jefferson Awards (22 wins), became the first recipient of Broadway in Chicago's Emerging Theater Award in 2007, and was awarded a 2014 National Theatre Company Grant by the American Theatre Wing, founder of the Tony Awards. The House Theatre of Chicago is thrilled to partner with The Palmer House for a seventh year in bringing one of the country's most exciting magical entertainers to audiences in Chicago.

Source: The House Theater of Chicago