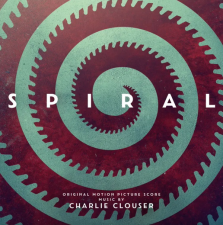 LOS ANGELES - EntSun -- Lakeshore Records is set to release the Spiral—Original Motion Picture Score digitally on May 21 with music by Charlie Clouser (Saw Series, Resident Evil: Extinction). The tension runs high in Clouser's score with intense electronic percussion and modified drum machines mixing with his trademark bowed metal instruments as well as the addition of a new Chas Smith instrument creation, the "Tio," that all serve to distinguish this score from his past work. The Lionsgate film directed by Darren Lynn Bousman and starring Chris Rock, Max Minghella, Marisol Nichols & Samuel L. Jackson is now in theaters.  The film was produced by Oren Koules and Mark Burg.

A criminal mastermind unleashes a twisted form of justice in Spiral, the terrifying new chapter from the book of Saw. Working in the shadow of his father, an esteemed police veteran (Samuel L. Jackson), brash Detective Ezekiel "Zeke" Banks (Chris Rock) and his rookie partner (Max Minghella) take charge of a grisly investigation into murders that are eerily reminiscent of the city's gruesome past. Unwittingly entrapped in a deepening mystery, Zeke finds himself at the center of the killer's morbid game. Spiral stars Chris Rock, Max Minghella, Marisol Nichols, and Samuel L. Jackson, and is produced by the original Saw team of Mark Burg and Oren Koules. The film is directed by Darren Lynn Bousman and written by Josh Stolberg & Pete Goldfinger. A Lionsgate release, Twisted Pictures presents, a Burg/Koules production.

Says Clouser: "Since a lot of the action in Spiral takes place in the outside world instead of in some dank dungeon somewhere, I wanted the score to have a brighter, more percussive feel than in some of the previous films.  There's less of the murky, underwater gloom and more tension-building rhythms, a bit more high-energy feel to many of the scenes.  Of course, the familiar murky feel is still there when things get dark, but it's not the dominant voice in the score any more.  I used some modified and "circuit-bent" drum machines and other weird electronic percussion to get a more urgent and propulsive feel, and there are moments in the score when we bring in some influences from modern trap beats and other pop music influences.  So that's a bit of a shift in tone from many of the previous films as well.  There's definitely a good helping of the unique bowed metal instruments that have appeared on previous SAW scores, with the addition of a new instrument called "Tio", from instrument builder Chas Smith, that I'd never used before."

Charlie Clouser is a multi-instrumentalist composer, musician, producer, programmer and remix artist who has worked with some of the seminal recording artists of the last twenty years. With his concentration now on music for visual media, Charlie continues to impress and amaze with his singular work.

Charlie came into prominence as a member of Nine Inch Nails from 1994-2000.  Before joining the band as keyboardist/programmer, he'd already built a following with his extreme synth work and remixes for Prong, Marilyn Manson, White Zombie, and others.  His dense layers of chopped up beats and grinding synthbass lines were instrumental in defining the sound of White Zombie's double-platinum 1994 breakthrough album Astrocreep: 2000 led to numerous collaborations with frontman Rob Zombie.

In the studio with Nine Inch Nails, Charlie co-wrote high-profile songs like The Perfect Drug (from the gold soundtrack to David Lynch's Lost Highway), and The Way Out Is Through (from The Fragile, Spin Magazine's 1999 Album of the Year). His intricate and singular programming style was an integral part of the band's unique sonic vision.  Along the way, he has continued to apply his talents on albums and remixes for artists like David Bowie, Snoop Dogg, Rammstein, Jamiroquai, Deftones, Killing Joke, Esthero, and Meat Beat Manifesto.

Charlie's first film scoring effort, Saw, became an instant cult classic. His scores for the subsequent Saw series continue to define the films. Raw, grinding, propulsive, punctuated by incredible layers of sound and energy, they are classics in the horror genre. Charlie has also scored such films as Resident Evil: Extinction, Sony's Pictures' The Stepfather, and The Collection.

In the field of television, Charlie has scored several TV shows, including the FOX event series Wayward Pines (starring Matt Dillon, Carla Gugino and Toby Jones), CBS's Numb3rs, NBC's Las Vegas and the Syfy event series Childhood's End. He also co-wrote the main title theme for FX's American Horror Story. In the video game space, he has scored the Activision video game Singularity, as well as licensing select music from his Saw score to Konami for Saw: II. His latest Saw installment, Spiral: From the Book of Saw will be released May 14, 2021.