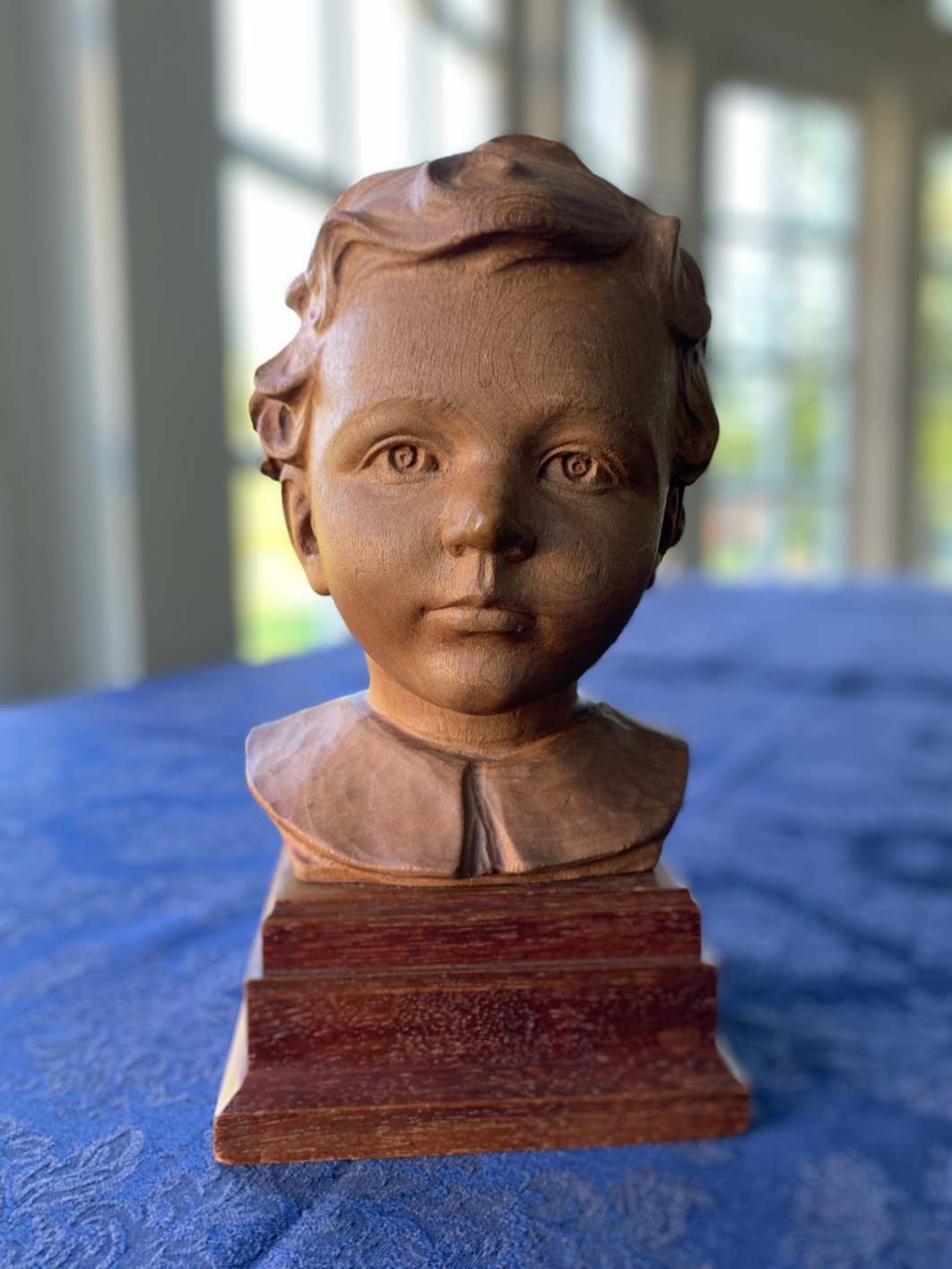 According to Morven's Curator and Deputy Director Elizabeth Allan, Morven was recently gifted a small bust of Sheila Johnson Brutsch (Robert Wood Johnson's daughter) as a child.  "Commissioned by Maggi and Robert Johnson in 1937, this portrait bust of their three-year old daughter gives a glimpse of what Sheila would have looked like during her childhood living at Morven."  The bust is on a Johnson desk and reflects the sweet relationship between father and daughter. Through oral histories we know the two shared breakfast together nearly every day during their tenure at Morven.

The limewood bust with walnut base was created by Scottish woodworker Alec Miller, who made numerous trips to America to complete commissions of children. While in Princeton, in fact, Miller sculpted Sheila Johnson and her best friend Alice Byrd, whose parents had her likeness done at the same time.

More on EntSun News
Robert Wood Johnson, Jr. and his family resided at Morven from 1928 to 1944.

In Nature's Realm: The Art of Gerard Rutgers Hardenbergh

Visitors continue to be entranced by the first exhibition examining the work of Gerard Rutgers Hardenbergh (1856–1915) on view in Morven's second floor galleries. Born in New Brunswick, the great-great-grandson of Reverend Jacob Rutsen Hardenbergh (1736–1790), the first president of Queens College (Rutgers University), Hardenbergh was a self-taught artist and ornithologist who lived on a houseboat, capturing in watercolor and oils numerous bucolic scenes along New Jersey's shore at the turn of the 20th century.

The exhibition runs through January 9, 2022 and registration for October programming, including The Art of Deception, Duck Decoy In-Person Workshop on October 17 with master craftsman Jode Hillman, and Secret History of American River People virtual program on October 28 with Artist/Director Wes Modes, is now open.  Additional exhibition-related programming is planned through the end of the year. Full details are available at www.morven.org/programs  or by emailing dlampertrudman@morven.org.

More on EntSun News
Morven Museum & Garden is open Wednesday through Sunday from 10:00 a.m. to 4:00 p.m. and is located at 55 Stockton Street, Princeton, NJ 08540. Order timed museum admission tickets at this link https://www.morven.org/tickets

Funding for In Nature's Realm: The Art of Gerard Rutgers Hardenbergh has been provided, in part, by The Hess Foundation, Fulton Bank, Liza & Schuyler Morehouse, Lisa & Michael Ullmann, and Bob N. Wilson & Michele Plante.  The exhibition is made possible, in part, by the Mercer County Cultural and Heritage Commission through funding from the Mercer County Board of Chosen Commissioners and the New Jersey State Council on the Arts, a Partner Agency of the National Endowment of the Arts.