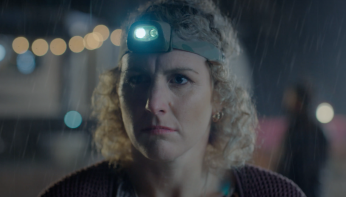 "The Stubborn Camper" is a comedic take on the differences between camping in a tent vs. an RV. Explore worked directly with the marketing team at Go RVing, who provided a loose idea of the concept. Explore produced from beginning to end, collaborating with their LA-based partner Brendan Beachman to write and direct the commercial. Shot in December in the Santa Monica foothills, the commercial follows two couples who take vastly different approaches to how they camp in the great outdoors. One couple chooses to bring an RV, while the other couple struggles to setup a tent before nature's elements arrive in an onset of progressive plagues. Rain, fire, and wind effects were all needed to hilarious results, and everything was successfully captured practically during production. The crescendo of the spot includes an infestation of mosquitoes, which along with some filled in elements, were added as visual effects in post.

More on EntSun News
Casting was done through RMB Casting in Venice, California and acting talent were all from the Los Angeles area. Post-production was produced and completed at Explore's editing suites in Chicago. Finish was achieved using Nice Shoes for color, Dan Bewick for mix/sound design, and then back to Explore for VFX / final finish.

"Let's face it: being outside is wonderful, but you can only tent-camp so long without running into trouble, just like our characters" says Explore's Executive Producer, Jeremy Pinckert. "It's nice to have a roof over your head when you sleep. We're so excited to once again partner with Go RVing to create digital content which has a nationwide reach. The marketing team led by Courtney Bias and overseen by Karen Redfern are extremely collaborative, and we are honored they trusted our team to create this digital :60 ad, and  stay-tuned there's a :30 version as well."

The ad is being placed through digital channels, and can be viewed on Go RVing's YouTube channel here: https://www.youtube.com/watch?v=Pu0yARS_LwM

More on EntSun News
ABOUT EXPLORE
Explore is a production company creating award-winning practical commercials & digital content for advertisers.  Founded in 2003, they have grown into a multi-city company with directors and representation in major advertising markets. They've won over 70 professional awards for their productions, including 52 Telly Awards and 15 ADDYs. They have also twice been Emmy-nominated for commercial campaigns. In addition to production, they are also experienced post producers, editing projects from national broadcast commercials to OLVs, digital content, and motion graphic pieces. For more information or to discuss production needs with a sales rep or producer, visit: http://www.explore-media.com/contact

ABOUT BRENDAN BEACHMAN
Brendan is a Colorado native but calls Los Angeles home. Specializing in performance heavy, cinematic, stylized comedy, he has directed over 70 commercials for clients like Budweiser, Experian, AllState, Quaker Oats, Johnson and Johnson, and many more.