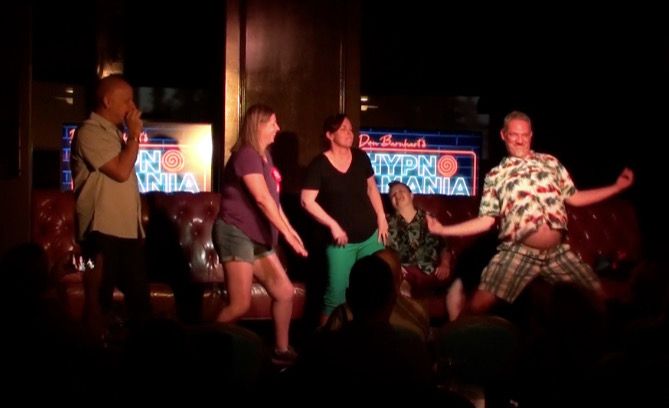 Having proved itself as one of the funniest new shows in Las Vegas, Don Barnhart's Hypnomania residency gets extended.
LAS VEGAS - EntSun -- Nominated as one of this years "Best New Shows", Don Barnhart's Hypnomania has proven itself as one of the funniest new comedy hypnosis shows by getting its residency extended.  Barnhart's show is as empowering as it is entertaining and Don leaves his audience volunteers feeling refreshed and recharged having learned a technique they can use long after the show".

Hypnomania delivers interactive, improvisational and sidesplitting comedy while simultaneously unlocking the unique mysteries of the human mind. It's a musical, fast-paced journey through volunteers' subconscious creative genius that keeps audiences on the edges of their seats. Akin to releasing the hidden talents of a dozen improvisational comedians onstage with Barnhart serving as the ringleader, each performance is unique and fun for all.

More on EntSun News
Audience members have the option to volunteer or sit back and watch.  Using techniques found in NLP (Neuro-lingusitic programing), guided meditation and hypnosis, Barnhart teaches his volunteers to focus their energy to release their anxiety, stresses and fears and tap into their creative abilities with confidence.

Barnhart has been entertaining the troops since 1992 and currently stars in the new documentary I AM BATTLE COMIC exploring the impact of entertaining the troops and the importance of keeping our soldiers' moral high.  Don works with veterans suffering from PTSD and has put up a free download to his Personal Power hypnosis session on his website. http://www.DonBarnhart.com

Don Barnhart's twenty plus years of standup comedy club experience are evident, as well as his Second City improv skills and his self-improvement hypnotic abilities. Everything comes together in a show that puts the audience on center stage, inhibitions gone, ready to perform like they never have before. Skeptics are encouraged to attend.

More on EntSun News
Don recently filmed his Dry Bar Comedy Special, which has over 4 million subscribers and also stars in the documentary, Finding The Funny with Brad Garret and Louie Anderson.

Tickets begin at $29.95 and are available at the box office inside The Downtown Grand or online at:  http://www.hypnomaniashow.com/Tickets.htm

For more information or to set up interviews, please visit http://www.hypnomaniashow.com