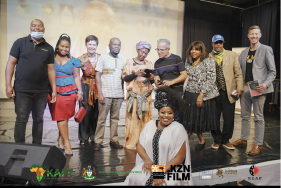 "Some members of my business and cultural arts team were in flight or preparing to come to South Africa as the news hit about the new variant," said Batiste, Cultural Arts Ambassador from New Orleans and founder of NOSACONN Inc.  "We were not deterred by the pandemic news.  Artists are often the avant garde of societal change; so, my team stayed committed to the mission to initiate talks to help bring hope, healing and prosperity as we face this pandemic together."

Energized by the news of the Grammy nominations of Jon Batiste, his first cousin and music director of the CBS Television show "Late Night Show with Stephen Colbert," Batiste, who had  brought Jon to South Africa during his formative music career, exemplified the "show must go on spirit." He refused to immediately return home as friends, family, and business associates concerned for his safety urged him to do.

"I have the highest confidence in South African scientists and the protocols that the country has set in place and I am pleased that my team kept to the vision," added Batiste.  "If we had heeded the naysayers, we would have missed out on the cultural exchange staged by Edmund Q. Mhlongo, founder of KCAP and the KwaZulu-Natal African Film Festival. We witnessed Clementine Mosimane and the cast of "Poppie Nongena" move a sold-out socially distanced opening night (November 30, 2021) crowd to tears, to laughter and triumph.  It is our hope Ms. Mosimane will join us in the U.S. at some point.  The film will resonate with American audiences." Ms. Mosimane's cast members Anna-Mart van der Merwe and Thembalethu Ntuli were also in attendance for the opening night festivities at KCAP.

More on EntSun News
KAFF included the screening  of award-winning New Orleans based historical film "The Opera Game," an examination of  1850's New Orleans chess prodigy Paul Morphy's tortured life, as part of the official selections of the festival.  Additionally, short documentary, "Love Separated in Life…Love Reunited in Honor" about the reburial of a Black Vietnam War hero at Arlington National Cemetery after 50 years in a segregated cemetery that screened coincidentally at the 2019 San Diego Film Festival along with "The Opera Game," was given a special screening for youth.

Batiste called together a team from across the United States to join him including: Bryant Johnson, co-founder of LyfePULSE of Denver, Colorado;  Grammy-award winning record producer Jimmy Mansion based in Los Angeles and owner of Cuba based "Ahi Nama Music, working extensively with Cuban musicians;  and  emerging filmmaker Jackie Wright, founder of Wright Enterprises, a public relations and media relations consultancy, based in San Francisco and Dallas.  Batiste's team is rounded out with South African musician and behavior therapist, Danny Peterson II of Cape Town, South Africa.  Peterson, the father of child genius, the phenomenal drummist, Danny Peterson III, has just completed a prototype at Pic n Pay using the healing power of music to improve the vaccination rate among the vaccine hesitant at Pic n Pay stores.

"I have worked with Damon since Danny was six years old.  He is one of the reasons Danny is studying at one of the most prestigious music schools in the U.S.," said Petersen.  Damon sticks with a vision until it comes to fruition.  The groundbreaking work I recently did with the Pic n Pay company where I literally drummed, gaining the trust of Pic and Pay clients so they would get vaccinated, is in alignment with Damon's work to continue to cultivate the arts for hope, healing and prosperity."

On last Wednesday, December 1, 2021, the U.S. delegation met with Durban ICC and City of Durban Officials to cast a vision for initial talks to strengthen the bond between the City of New Orleans and Durban's Sister-City Relationship.

The richness of culture is all around and the ease of cultural exchange especially through media was shared at the meeting by Bryant Johnson of LyfePULSE, NOSACONN's new digital media company, as he shared a short video about a smple human encounter on a Durban Beach of a Karate instructor empowering youth: https://youtu.be/7_XefeSXN0M.  He also shared a New Orleans short video of an artistic dreamer who wants to be an attorney: https://youtu.be/WwrerVaEudw.  It was an example of citizen diplomacy as stories were shared.

More on EntSun News
After the Durban ICC meeting, Batiste and team toured the township of Clermont with Simo Nzama, CEO of Babuse Communications and social entrepreneur Sibusiso Masoka, owner of EarTech founded with his father Zibuse Masaka. Johnson also developed a short video about the township tour: https://youtu.be/_xrtI7TzqVA.  It is an affirmation of Batiste's vision of bringing access to all as he opens doors of opportunity to up and coming artists in the U.S. and Africa in his NOSACONN Inc., New Orleans South Africa Connected.

With meetings also held in Johannesburg, Batiste returns to his hometown of New Orleans soon to continue planning other arts and business -related projects yielding new cultural exchange ideas with artists like solar harnessing Tumelo Joy Mokopakgosi and his up and coming mentee, candle wax artist, Lebo Matshaba. Bryant Johnson's (LyfePULSE) captivating recorded exchange between Mokopakgosi and Matshaba is indication of the rich cultural experiences to come from Batiste's and his team's efforts: https://youtu.be/Rrjc3MfVVEw.

Over the past 20 years, NOSACONN has produced outdoor concerts, educational workshops, empowerment seminars, business expositions, and youth enhancement programs. Since its inception, the company has employed over 1000 people, including mentoring youth in our local school system.

Founded by Damon J. Batiste in 1998, the New Orleans South African Connection, Inc. (NOSACONN) is a non-profit 501 (c) 3 organization, comprised of business, civic, community and entertainment industry leaders, both in New Orleans and in the Republic of South Africa. NOSACONN has recognized the field of arts, culture & education on a local, regional and international level as a tremendous networking tool for job creation, tourism, and self-empowerment. NOSACONN has served as an incubator for economic sustainability.