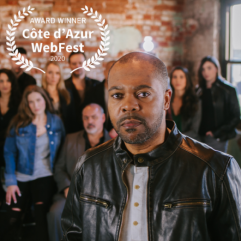 Côte d'Azur Webfest is the first international web festival on the French Riviera dedicated to presenting, recognizing and advancing short form digital content from around the World. Côte d'Azur Web Fest normally takes place in The South Of France during the Festival de Cannes. However, ​due to Covid-19 restrictions, the festival was conducted online in an exciting new virtual format from June 22 to June 26th.

More on EntSun News
"HERRINGS" is a dramatic thriller about a skip ​maker, someone who helps people disappear in plain sight and whose actions reverberate with a diverse ensemble of characters as they intersect and overlap within the city of Philadelphia. The show explores the lives we present in public versus the one we lead in private. Created by Black filmmaker, Keith Chamberlain in 2016, the show has to date, won over a dozen awards and received over 30 nominations in festivals ranging from Miami, Florida to Seoul, South Korea. Episodes from Seasons 1 & 2 are currently available at www.herringstheseries.com.