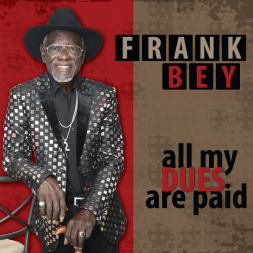 The Southern Gentleman of the Blues releases his eagerly-anticipated sophomore album on Nola Blue Records.
LANCASTER, Pa. - EntSun -- In follow up to his award-winning 2018 album, Back In Business, Frank Bey powerfully asserts his career status with All My Dues Are Paid.  Co-written with Nola Blue Records label mate Kathy Murray, album producer Kid Andersen and co-producer Rick Estrin, the uptempo title track for his sixth album is a celebration of the unstoppable journey of soul bluesman Frank Bey.

More on EntSun News
Born in Millen, Georgia and starting his musical career in gospel at the tender age of four, Frank Bey is a six-time Blues Music Award nominee.  Currently residing in Philadelphia, PA, Bey is a beloved international performer and recording artist.  "Frank Bey - You're Going To Miss Me," A feature documentary film about the life and musical journey of Frank Bey, is currently in post-production.  For more information about Frank, his music and the film, visit www.frankbeymusic.com and www.frankbeyfilm.com.