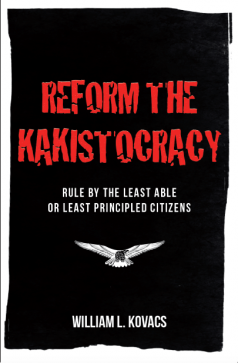 (Great Falls, VA) -- The INDEPENDENT PRESS AWARD recognized
Reform the Kakistocracy: Rule by the Least Able or Least Principled
Citizens, by William L. Kovacs as the 2021 winner in the category of books on
Social/Political Change.

The competition is judged by experts from different aspects of the book industry, including publishers, writers, editors, book cover designers, and professional copywriters. Selected award winners and distinguished favorites are based on overall excellence.

Reform the Kakistocracy: Rule by the Least Able or Least Principled
Citizens, by William L. Kovacs, winner of the Independent Press Awards,

More on EntSun News
2021 Social/Political Change category, sets out how the federal government
transformed itself from one of limited powers to one of immense power
without any constitutional changes. Kovacs states, "These changes in
institutional power fundamentally affect the relationship of citizens to their
government. Government is now the master and citizens the servants of
government. The loyalty of today's elected officials is to political party and
ideology, not to solve problems for citizens."

Unlike many books on government reform, Reform the Kakistocracy does not let the reader dangle with fuzzy proposals. It presents clear, thought-provoking ideas for
reforming government to make it work for citizens, not politicians.
Proposals range from electing officials who will function as fiduciaries to
citizens, not as politicians serving interest groups; devolution of power to
states; Congress reclaiming powers it delegated to the executive and courts;
creative ways to reduce federal debt; mechanisms to ensure government

More on EntSun News
transparency and many other innovative principles of governance.

In 2021, the INDEPENDENT PRESS AWARD had entries worldwide. Participating authors and publishers reside in countries such as Australia, Canada, India, Ireland, Japan, Singapore, Switzerland, United Kingdom, and others. In addition, books submitted included writers located in U.S. cities such as Atlanta to Santa Fe; Chicago to New York; from Boise to Honolulu, and others.

"We congratulate this year's 2021 winners and distinguished favorites in the annual INDEPENDENT PRESS AWARD. The quality and quantity of excellent independently published books hit a record. Independents recognized are thriving around the world. We are so proud to announce these key titles representing global independent publishing." said awards sponsor Gabrielle Olczak.
Visit the author's website:  https://www.reformthekakistocracy.com/