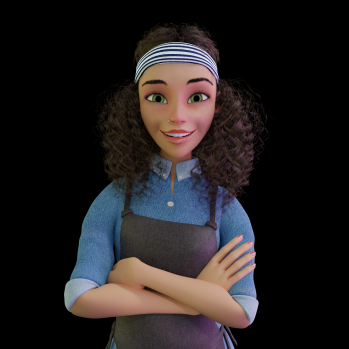 Digital Humans are looking to replace physical humans on social media, TV, and Film. Is there anything to stand in their way of attracting large audiences and being the next Selena Gomez or Rachel Ray?
LOS ANGELES - EntSun -- The Virtual Human Chef Jade and the company that created "her", Jade &  Zelda, LLC, are signing with the talent management firm, V2 Management (V2M) in order to secure Sponsorship, TV, and Film deals for its Intellectual Properties. V2M, a Los Angeles-based company that operates worldwide, is traditionally known for representing creatives in TV and Film but is making a move to bulk up its roster with creative entitles tied to the Metaverse.

Chef Jade launched in 2020 and has since attracted millions of users to her website, cookingwithjade.com, where she hosts recipes and stories of her travels from around the world. The multi-racial, Gen-Zer who is created in 3D animation and CGI was developed by Virtual Human company Jade and Zelda and they're positioning her as the future of Influencers. She has a backstory, a family, and even a pet dog she travels the world with. Users have looked beyond the fact that she was created by software because they love her recipes and travel advice.

More on EntSun News
A spokesperson for V2M,  said: "We notice a rise in these Digital Humans during the middle of the pandemic and saw how audiences were growing more comfortable with seeing them next to their favorite brands and realized it's not going to stop at commercials."

Currently, the biggest Virtual Human is Miquela. She boasts over 3.1 million Instagram followers, 3.4 TikTok followers, and 282,000 Youtube Subscribers.  She's landed deals with Samsung, Prada, and Calvin Klien and reportedly made over $10 million in 2020. Miquela is the perfect representation of the times when talking about Virtual Humans and Media.

Jade and Zelda see their IPs being a part of daily life as technology such as Augmented Reality and Virtual Reality advances and they wanted to work with a company that saw a similar future for Virtual Humans. "While meeting with various talent representation firms, V2M was the only one who truly understood the Virtual Human space and the possibilities for these IPs.", said Tori Arnold, COO of Jade and Zelda.

More on EntSun News
Learn more about Jade and Zelda, LLC at www.jadeandzelda.com

About Jade and Zelda
Jade and Zelda, LLC. is Los Angeles-based, woman and minority-owned, content creation company. It owns and operates 5 Virtual Human Intellectual Properties with advertising outlets that are offered to brands.

About V2 Management
v2 Management LLC is a professional services company catering to creatives in the entertainment industry. The core focus is on Talent Management, Business Management, and Investment Advising.