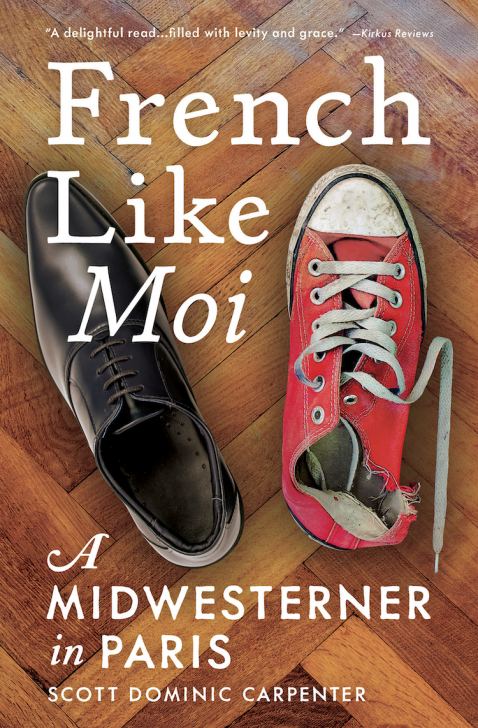 Minnesota author Scott Dominic Carpenter to appear with acclaimed writer Lorna Landvik and other authors in a series of regional book events.
MINNEAPOLIS - EntSun -- Demand for the humorous memoir French Like Moi: A Midwesterner in Paris by Minnesota author Scott Dominic Carpenter has moved it into a second printing just two months after publication.

With strong pre-orders, the book released in July by publisher Travelers' Tales has enjoyed accelerated sales in all formats, rising quickly into Top Seller Ranks.  French Like Moi remains high in the categories of Travel Humor, and Cultural, Ethnic and Regional Humor, with sales of more than 3000 copies.

French Like Moi has received national attention with top-tier reviews in media and recognition from acclaimed writers.

"Carpenter's tales of life in the French capital will make you laugh, marvel, and daydream."—Lorna Landvik, author of Chronicles of a Radical Hag

"Readers will find plenty to appreciate in his sharp take on expat life." —Publishers Weekly

A national book tour of virtual events with bookstores, libraries and organizations like Alliance Française and the American Association of Teachers of French has brought French Like Moi to readers in cities across the country. With growing sales and a slate of fall author events, the publisher ordered a second printing to keep pace with orders and to prepare for holiday seasonal shopping. (The book is featured in the 2020 Winter Catalog of the Midwest Independent Booksellers Association.)

More on EntSun News
October events include the Rain Taxi Twin Cities Book Festival, happening virtually from October 15th to 17th. The author will appear in the Minnesota Author Mashup, a showcase of prominent regional writers.

On October 1st at 6:00 PM CDT, The Federation of Alliances Françaises USA will host a national Zoom event for all chapters with the French Like Moi author, in conversation with renowned travel writer and editor Don George.

On October 9th at 7:00 PM CDT Next Chapter Booksellers in Saint Paul will host a virtual book talk with the author in conversation with humorist and writer, Lorna Landvik.

About French Like Moi: A Midwesterner in Paris
When Scott Carpenter moves from Minnesota to Paris, little does he suspect the dramas that await: scheming neighbors, police denunciations, surly demonstrators, cooking disasters, medical mishap. Nothing in the City of Light can be taken for granted. Carpenter guides us through the merry labyrinth of the everyday, one hilarious faux pas after another. Through it all, he keeps his eye on the central mystery of what makes the French French (and Midwesterners Midwestern).

More on EntSun News
About Scott Dominic Carpenter
Minnesota-born and Midwest-bred, Scott Dominic Carpenter is the author of Theory of Remainders: A Novel (named to Kirkus Reviews' "Best Books of 2013") and This Jealous Earth: Stories. Winner of a Mark Twain House Royal Nonesuch Prize for humor (2018), recipient of a Minnesota State Arts Board grant, and semi-finalist for the Many Voices Project Prize, he has published work in a wide variety of venues, including The Rumpus, Silk Road, Catapult, South Dakota Review, and various anthologies. Carpenter teaches French literature and creative writing at Carleton College (MN).