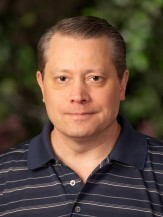 Dr. Walters' research focuses on mental and behavioral health among college students, and since 2012, he has mentored 45 student research assistants, including Mensan Paul McKee, who nominated Dr. Walters for the award. Dr. Walters and his students have published nine papers in scientific and professional journals, delivered 12 oral presentations, and presented 76 posters at scientific conferences. Beyond that, he said, "mentoring and having a positive impact on them in this way is, simply put, the most rewarding aspect of my career."

More on EntSun News
That mentoring relationship has also been rewarding for McKee, a Marine-turned-undergrad whose unique challenges were converted to familiar successes by Dr. Walters. "All I had in which to present my case [as a research assistant] was fellow veteran status, a short fiction story I had written for a class, and my Mensa membership card," McKee recalled in his nominating essay.

Under Dr. Walters' guidance, McKee has pushed past his early lack of an academic track record and is now pursuing admission to doctoral programs in behavioral neuroscience.

"From early on, I saw much of myself in him. We both came from humble and even disadvantaged beginnings but had a fierce desire to work hard and rise above. He was respectful, personable, and engaging," Dr. Walters said. "I took a chance and invited him to join my research team. To this day, I have no regrets."

"The Mensa Foundation is honored to recognize Dr. Walters, whose research and instructional approach exemplifies the Foundation's mission to use intelligence to benefit humanity," said Marie Mayer, Mensa Foundation President.

More on EntSun News
A licensed clinical and forensic psychologist, Dr. Walters is a military veteran and was the first in his family to graduate from college. He earned his Ph.D. in clinical psychology at the University of Nebraska. After several years in clinical practice, he returned to academia in 2012. He becomes the third higher education instructor to win the Mensa Foundation's Distinguished Teacher Award, given annually since 2003 to recognize a teacher, professor or instructor at any educational level who has had an especially positive influence on the education or life of a Mensan.

For almost 50 years, the Mensa Education and Research Foundation has unleashed intelligence by providing scholarships, promoting research, championing gifted youth, and empowering educators. Governed by a volunteer Board of Trustees, the Mensa Foundation is a 501(c)(3) organization funded by American Mensa, Mensa members, and other charitable donations.