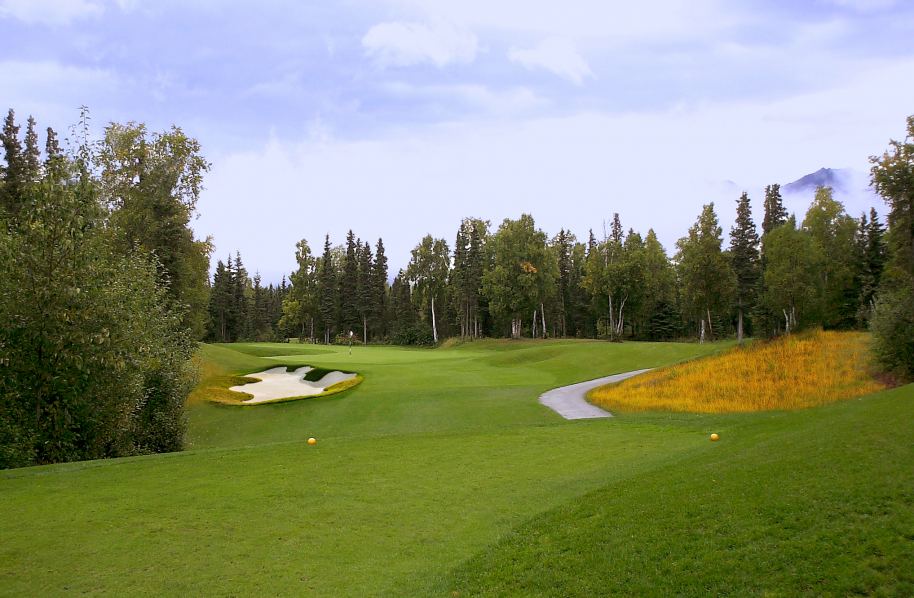 USGA Executive Director Mike Davis announced the event by saying, "It's a monumental occasion for us to bring a championship to Alaska, something that has been a long time coming...it is important we bring our events to all corners of the United States to expose golfers and golf fans to the inspiration and competitiveness of our championships."

"Doing work in Alaska is different than most places," commented Forrest Richardson. "Here we have only so many months of golf weather, and that time in between the summer and the depth of Winter is very short and always wet." The team has developed specialized methods of shaping and protecting the work from rain, including the use of tarps with rapid installation of bunker drainage, liners and sod. "It's like a pie factory where the conveyor belt doesn't stop," says Richardson. "We have crews hopping forward and it's all been planned down to the minute."

More on EntSun News
Verde Sports Construction was selected as the builder, led by shaper Jay Smith based out of Live Oak, Florida. Smith is one of the first applicants to become an American Society of Golf Course Architects (ASGCA) Associate, having spent the past several years overseeing his own design projects. "Jay's passion and eye for the integration of the bunkers into the natural surrounds are why we brought him in," notes Jeff Danner, who is overseeing the project for Richardson | Danner. "It's a collaboration, which is necessary to achieve the transformation at Anchorage in the short window we have due to the weather." The club's original bunkers never really matched the ruggedness of the site, a conclusion reached during the early master planning work.

Bunkers will be built to the Better Billy Bunker system. In addition, the team is completing a 12,000 s.f. short game green complex that was started last season. Eventually the short game area will anchor a 6-hole short course dubbed "The Little Bear," offering the city a much-needed training ground for kids. "Anchorage is literally at the end of the earth," says Richardson. "A short course here will open doors for youth that need activities during their long 19-hour summer days, and it will be a place where families can play together in an hour or less."

More on EntSun News
The USGA Women's Senior Amateur is scheduled to take place from July 30-Aug. 4, 2022, and is expected to fill Anchorage's inventory of lodging accommodations. Already the City has signed up more than 200 local volunteers to handle the tournament and hospitality venues. "We're thrilled and honored to be the first golf course in Alaska to host a USGA championship," said Rich Sayers, general manager. To showcase to the world what sort of golf we have here in Alaska, and demonstrate both the challenge and beauty of our golf course on such a grand stage, is something we cannot wait for."

For information contact: valerie@golfgroupltd.com
For a link to the USGA