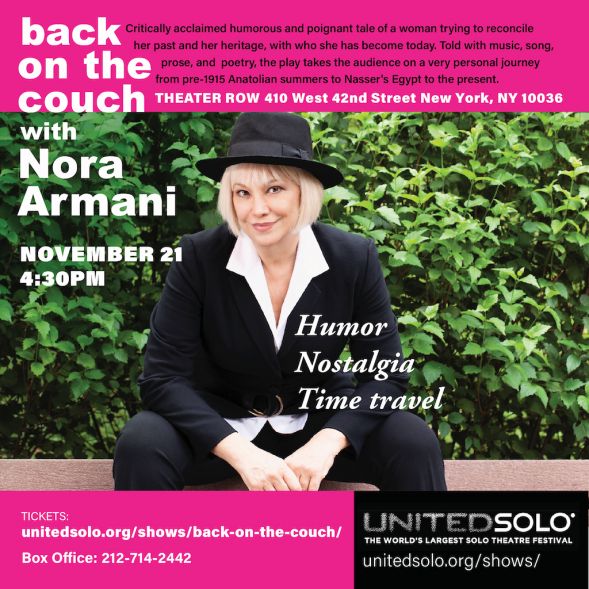 Back on the Couch with Nora Armani presented on November 21st, 4:30 PM as part of the 12th UnitedSolo Theatre Festival on Theatre Row in New York City.
MANHATTAN, N.Y. - EntSun -- This funny and poignant tour-de-force, written and performed by Nora Armani to worldwide acclaim comes back to New York after a short absence, this time to audiences on Theatre Row as part of the UnitedSolo Theatre Festival 2021.

Armani is an Armenian-Egyptian-French-British-American woman embarking on a journey of self-discovery in her self-penned one-woman show revisiting her adolescence on the banks of the Nile while settling accounts with a long lost love. Sharing her inner world through laughter and tears, she invites us on her breathtaking odyssey of belonging, searching, and finally discovering herself.

"I am excited to revisit this work that is such a personal story, after several years, where a lot has happened in my life personally and in the world in general. Therefore, it was impossible not to take all those changes in to come up with an updated version. So here it is," said Armani.

More on EntSun News
Stories from pre-1915 Anatolian summers passed on to her by her grandmother are evoked and mingle with Nora's own personal reminiscences of her childhood and adolescence in Nasser's Egypt, her desperate need to belong somewhere, her peregrinations through the world, and poignant experiences that have forged her identity shaping her into the woman she has become today.

- Armani is an award-winning actress (DramaLogue, Best Actress Armenia - Stage & Screen) and has represented the Ministry of Culture of Armenia in cinema.

- Armani has performed On the Couch on four continents in over 25 cities worldwide in its English and French versions to high critical acclaim. A multilingual actress, she performs in four languages.

More on EntSun News
- On the Couch with Nora Armani is written and performed by Nora Armani (New York), and it is directed by François Kergourlay (Paris).
- The show was highly recommended by filmmaker George Sluizer (The Vanishing).

"Rewarding moments of crystalline clarity. Armani gives herself the freedom to actually be herself." wrote Talkin' Broadway about the actress.

Check out other press clippings, video clips, and more information on Nora Armani, including acting, directing, and producing credits, on www.noraarmani.net.