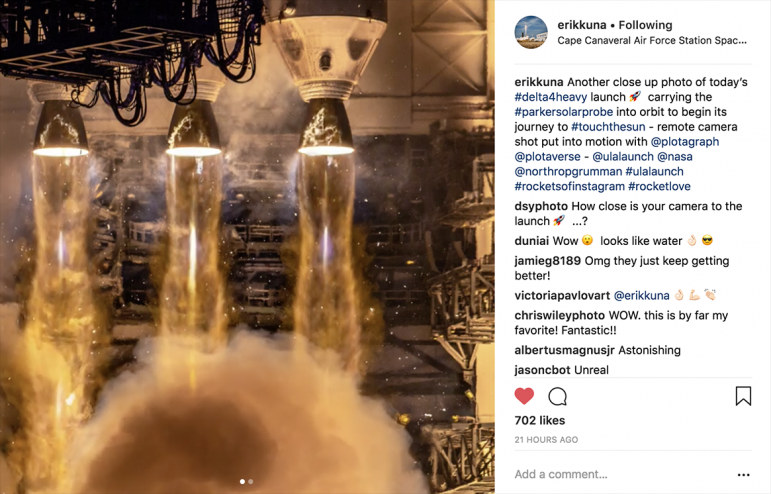 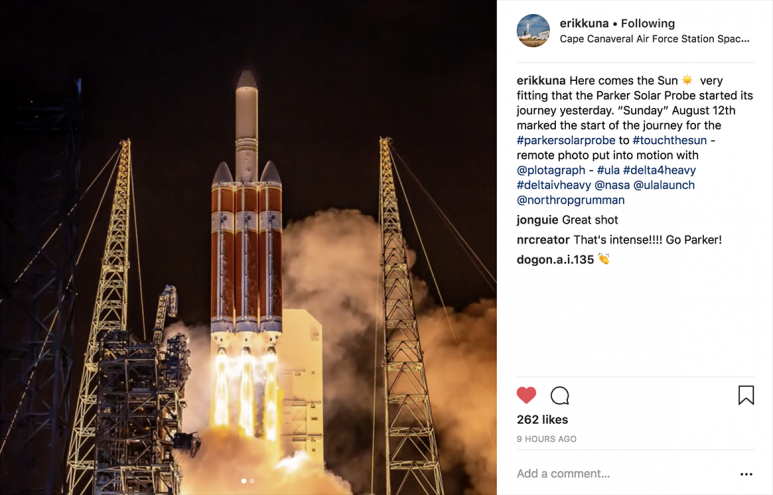 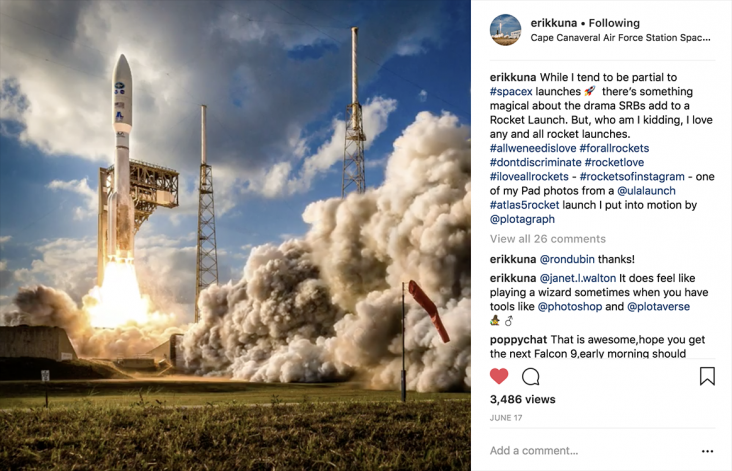 Photographer, Erik Kuna, reveals the secret behind the viral motion effect
MAUI, Hawaii - Aug. 13, 2018 - EntSun -- Rocket Launch and Space Photographer, Erik Kuna, captured the 43,000 mph departure of NASA's Parker Solar Probe at 3:31 a.m. ET on Sunday, August 12. The record speed launch of the mammoth vehicle can be seen in a baffling close up shot, that appears to be moving like a live video in slow motion. As NASA's $1.5 billion vessel shoots through space, it will reach a speed of 430,000 mph (692,000 kph), setting a new record for the fastest man-made object in history. However, this historic moment has not left Earth entirely, along with the Parker Solar Probe. Erik Kuna's capture of world's first ever mission to "touch the sun", is brought to life thanks to the hypnotizing looping effect called "Plotagraph".

Three massive, solid rocket boosters can be seen firing away relentlessly. The following image in Erik Kuna's Instagram post shows the exact same scene without any motion whatsoever. How is this effect possible? The answer to the mystery is that Erik created the Plotagraph from this one single still photograph. Using the unique photo animation software called Plotaverse, Erik was able to blow life into captured history. With just a few swipes, Erik added motion to his incredible close up shot. " I really fell in love with the software and what it could do" Erik explains in his interview with Plotaverse. "I've really become a Plotaverse addict. Rocket photography is just made for it. The smoke, fog and fire mixed with an object that is frozen in time, that is usually moving past the speed of sound, makes for one interesting scene."

More on EntSun News
PLOTAVERSE:  What do you enjoy most about animating your shots with the Plotagraph effect?

Erik Kuna: "I really love how arresting my shots become with Plotaverse. I love seeing that look on people's faces when they view it on a screen or in their stream. It's that double take where they first pause to admire the shot for something their eyes are telling them is interesting. Then they realize it's in motion but they don't know how to process it. That's the real win for me with Plotagraph. When I can enhance the photo just enough to make it play with your mind and look at the Rocket from a different perspective, I feel like I've done my job. But, it hasn't stopped there. I've recently pushed it further to see how far I can go. I recently asked one of my friends and colleague at Scott Kelby if I could take some of his amazing images and see if they would work Plotagraphed. To my surprise, about 80% of the landscape, wedding and sports photos from his portfolio that I tried worked beautifully when Plotagraphed. So much so, that I can say with all confidence now that if used properly, Plotagraph is a tool that should be in any photographers belt."

Erik Kuna is the Vice President of Operations for KelbyOne. Over the last fifteen years he has worked with partners such as Adobe, Google, Canon and B&H Photo to produce training videos and events to help their customers and clients unlock their full potential via education. Driven by a passion for Photography, when Erik is not producing training, he can be found around NASA, photographing Rocket Launches for SpaceX, ULA, Orbital ATK, and other launch providers. Covering launches for multiple news agencies  and media outlets, Erik sets out to capture the beauty and inspiration of rocket launches and space exploration to share with the world and inspire a new generation of innovators.

More on EntSun News
To find out more about how to create engaging, looping animations with Plotaverse, as seen in this video, visit plotaverseapps.com