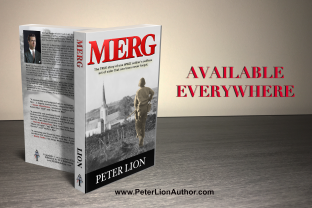 For Memorial Day comes the TRUE story of a WWII soldier's selfless act of valor, and the one town that never forgot.
NEW YORK - EntSun -- George Mergenthaler had it all. Young, charismatic, strikingly handsome, a gifted athlete, an Ivy League graduate who spoke fluent German and French, "Merg" as his friends called him, was also the sole male heir to a vast family fortune.

However in December 1941, when the Japanese attacked Pearl Harbor, none of that mattered. Wanting to do his part, Merg gave up his charmed life and enlisted in the Army. He was assigned to a Reconnaissance Troop in the 28th Infantry Division, that would fight through France, Belgium and Luxembourg. In mid-November 1944, after two weeks of horrific, bloody fighting in the Huertgen Forest, the battered and battle-hardened 28th Infantry Division was sent west to Luxembourg for some much needed R&R.

More on EntSun News
Merg and the rest of the Recon Troop were sent to the small town of Eschweiler, where the soldiers quickly bonded with the townspeople, sharing their homes, meals, hopes and dreams. Able to easily communicate, and sharing his bountiful care packages from home, Merg was quickly embraced by the town as one of their own. For that brief period, life seemed almost normal.

The idyll was shattered a month later when the Germans launched a surprise attack through the Ardennes Forest. The Battle of the Bulge had begun. Eschweiler, along with the rest of Luxembourg, was about to be overrun by the rapid German advance. Forced to retreat from Eschweiler, the Recon Troop drove into the spearhead of the German advance in that sector. Pinned down, with capture or death their only options, Merg proved what a truly exceptional man he was.

"A memorable and poignant micro-narrative from World War Two... a hugely moving story, elegantly told."
— Roger Moorhouse, Historian; author of "First to Fight: The Polish War 1939" and "Berlin at War"

More on EntSun News
"A powerful and profound book, a must-read for enthusiasts of history and military nonfiction, MERG is a story of selflessness and heroism, the story of a remarkable buck private who loved a town, and the town that loved him back."
— Marcus Brotherton, New York Times bestselling author of "Blaze of Light", "We Who Are Alive & Remain", "A Company of Heroes", and "Shifty's War"

"A sweeping and inspiring true story of honor, bravery and sacrifice that endures to this very day. A powerful must read."
— Kevin Corke, FOX News White House Correspondent

To book author Peter Lion for an interview/appearance visit: https://www.peterlionauthor.com