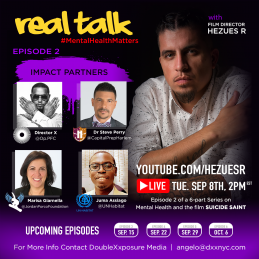 NEW YORK - EntSun -- After the successful launch of his weekly show, "Real Talk", film director Hezues R (whose movie regarding mental illness, "Suicide Saint", is slated for release in late 2021) welcomes four professionals to discuss the issue of mental health in week two of this six part series. This segment will be streamed live at 2 pm EST, Tuesday, September 8th, and archived for future viewing (www.youtube.com/hezuesr)

Julien Christian Lutz, a/k/a  Director X, is known for his work with Drake, Rihanna, Kendrick Lamar, and Kanye West. A filmmaker, an artist and now a community advocate, he draws on his own experience with gun violence to head up a movement called Operation Prefrontal Cortex. A highly intelligent speaker, his topics include wellness and community.

Dr. Steve Perry is one of the most sought-after nationwide, motivational speakers in America. Widely respected by grassroots community members and internationally renowned leaders as an educator, social worker and public speaker, his charismatic and compelling voice is an inspiration. He opened his third school, helped Steve Harvey write his book "Jump," has spoken in over 79 communities, completed his sixth book "Transparanting" and is in the process of launching his fourth school with Sean "Diddy" Combs as an investor, pledging one million dollars to fund the school for local youth.

More on EntSun News
Juma Assiago serves as the Global Coordinator of the Safer Cities Program at UN-Habitat. He has extensive international working experience providing technical support to both national and local governments on the development and implementation of city crime prevention and urban safety strategies.  He has built a credible professional network and working experience, built managerial capabilities, and political contacts with UN partners, central governments and local authorities as well as funding partner institutions and international support agencies.

Marisa Giarnella is the co-founder of the Jordan Porco Foundation, launched in 2011 after the loss of her son, Jordan, to suicide when he was a freshman in college. In her grief, Marisa learned the unacceptable statistics surrounding mental health and suicide in the young adult population, and decided she needed to turn her grief into action so that other families would never have to experience such a profound loss. Located in Hartford CT, the Jordan Porco Foundation is committed to preventing suicide in the high school, college, and college entry student population. Through awareness, education, and innovative programming, JPF is challenging stigma around mental health and help-seeking, creating open conversations about the prevalence of suicide and mental health issues in the young adult population, and saving lives.