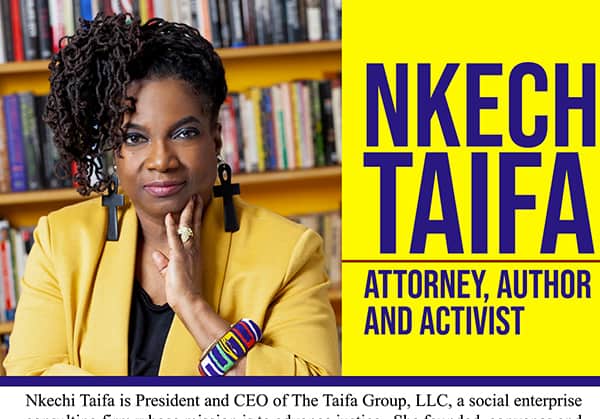 Underwood, a music mogul who promoted and jumpstarted the careers of top R&B and pop stars of the 80s and 90s, was sentenced to life without the possibility of parole for drug conspiracy. With the swift thrust of a gavel, he went from a savvy businessman to a prisoner who would never see his children, and later, grandchildren, outside of prison walls. Through the unswerving advocacy efforts of Taifa and the Underwood family over the past ten years, his case gained steam among celebrities such as MC Hammer, R&B singers Johnny Gill & Keith Sweat, Senator Cory Booker and others who sought Mr. Underwood's release from the oppressive life sentence. Freedom  finally came for him in January through compassionate release after 33 years and since that time, the 67 year old grandfather has followed in Taifa's footsteps, becoming a consummate advocate for those deserving a second chance, meeting with high level policymakers and even testifying before Congress.

More on EntSun News
This is but one example of the work of Nkechi Taifa. As convener of the JusticeRoundTable.org, a progressive voice for justice reform, Nkechi seeks to bring issues like this imbalance to the attention of mainstream society.  Through her work, the plight of incarcerated persons is no longer "on the fringes of society, but now are smack in your face."  And indeed, William Underwood will be a guest at Thursday's gala!

On the 20th anniversary of the annual NACDL Foundation for Criminal Justice Gala, it is only fitting that this group of esteemed attorneys highlight the decades of her relentless work. The National Association of Criminal Defense Lawyers has long held the position of serving the community, by serving as leaders who are actively "identifying and reforming flaws and inequalities in the criminal justice system." Taifa is surely a crown jewel in this sea of do-gooders who want nothing more than fair and equitable distribution of the law. The author of "Black Power, Black Lawyer: My Audacious Quest for Justice," has long been a voice for the voiceless, crying out against mountains of injustice. The timeless memoir spells out the blood, sweat, and tears it takes to see true transformative justice in this country.

More on EntSun News
In keeping with the theme of the evening, "Building on the Past, Imagining the Future," Nkechi is perfectly positioned to be a recipient of this great honor. The inspiring and fiery host of the "Black Power Hour" is reaching back through history to gain strength and strategy to overcome present-day inequities. On her fast-paced, informative show, Taifa brings historical heavyweights to the table with newly rising stars of the justice movement. These timely interactions foster hope, resilience, and a pathway forward.

This pivotal year, as the attendees gather at the National Building Museum in the nation's capital to honor Nkechi Taifa, her voice will be heard ringing through the halls of justice and beyond. Other honorees that evening include NPR's Carrie Johnson, celebrity/philanthropist Jason Flom, and departing NACDL Executive Director Norman Reimer. The in-person event will also be livestreamed.