Honor Indigenous People's Day with "The Women in the Sand" 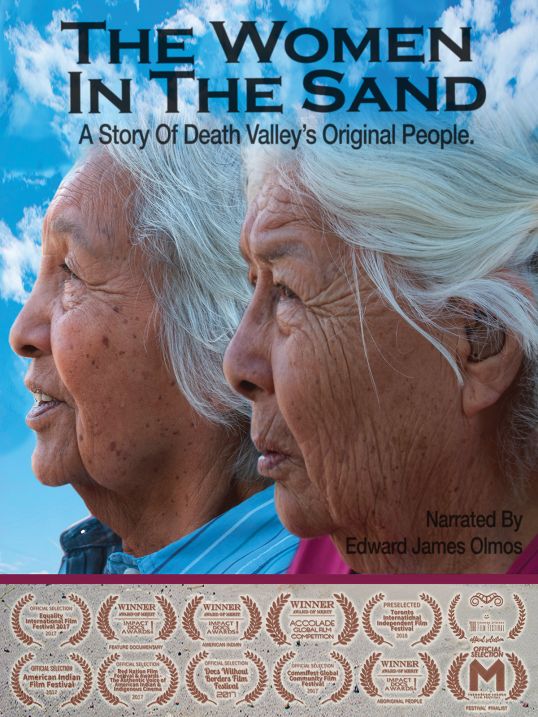 Watch the documentary that helped launch the Tupippuh Project of the Timbisha Shoshone People
LOS ANGELES - EntSun -- The documentary film The Women in the Sand: A Story of Death Valley's Original People is available to stream on Amazon Instant Video and on DVD at MovieZyng.  Reel Reviews calls The Women in the Sand "a wonderful documentary that will bring tears to your eyes with its tales and its scenery."
Golden Globe winner and Academy Award nominee Edward James Olmos narrates this moving story of Pauline and Maddy Esteves, two tribal elders now in their 80s and 90s, who have struggled all their lives with the Federal Government and their own Tribal Council to overcome injustice and save the ancient culture of Death Valley's original people. Through storytelling and archival images dating back to the Gold Rush, Pauline and Maddy, along with historians and other members of the Timbisha tribe, reveal the rich history of their people and their unyielding courage to stand up to corporations, the U.S. government, and greedy Tribal authorities.

More on EntSun News
Reel Reviews goes on to say that this award-winning film by Leftwood Pictures director Steve Jarvis "shows viewers a harrowingly beautiful documentary about a group of female survivors holding onto a legacy that those in power – this American government – cares little about.  These women, as they are STILL being mentors to younger native teens, continue to be shining examples to their tribe, fighting to stay alive as they travel from one resource to another as they confront all manner of struggles."
Embraced by Native Americans and advocacy groups alike, the producers have donated a portion of the film's revenues to support the Tupippuh (Homeland) Project, a nonprofit Native American organization dedicated to the protection of the environment and preservation of the language, arts and cultural traditions of the Timbisha Shoshone People.
Watching, sharing, and talking about The Women in the Sand is a great way to observe 2019's Indigenous People's Day on Oct. 14 and beyond.