Going with the flow: Kraft-Sussman brings new eco-friendly cremation option to Nevada viewed as gentler on the deceased 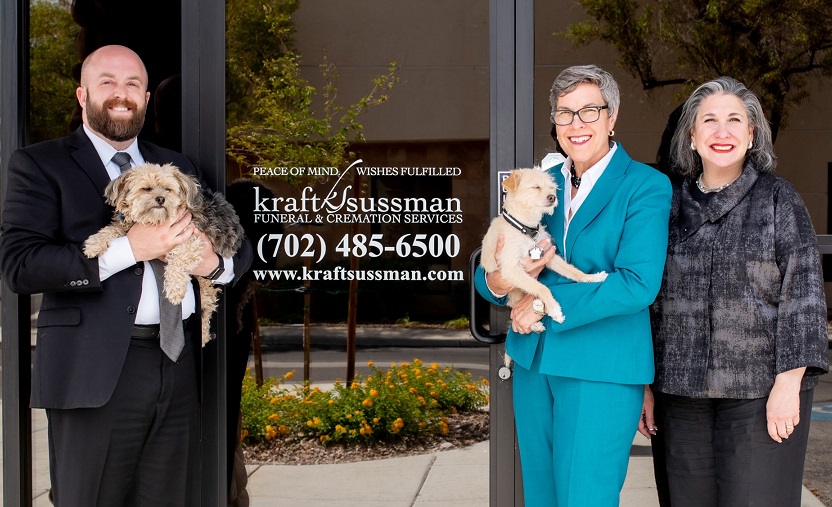 LAS VEGAS - EntSun -- Dealing with the death of a loved one can be hard on families. But thanks to new technology coming to Kraft-Sussman Funeral & Cremation Services, the cremation process can be a more gentle experience and easier on the environment.

About three years ago, owners Wendy Kraft and Laura Sussman were attending an industry conference when they heard about alkaline hydrolysis — also known as Aquamation — a cremation process that uses water instead of fire to decompose a body. After researching it, they decided it was something they should look into bringing to Nevada.

"We do a lot of advanced planning to try to help people have peace of mind knowing everything is taken care of before they pass away. In the past year, if people were choosing cremation, we asked them: If the Aquamation option was available, would they choose Aquamation? All but two people said they would prefer it," Sussman said. "When I talked to other funeral directors, some said 80 to 95 percent of the families they worked with chose this over flame cremation because they considered it a more gentle process and because of the environmental impact. Some people I've talked to weren't comfortable with flame cremation. They think this is a great option."

In Aquamation, the body is placed in a stainless steel vessel and a combination of gentle water flow, heat, pressure and alkalinity are used to accelerate the natural process of tissue hydrolysis. The solution used is 95 percent water and 5 percent alkali, a combination of sodium and potassium hydroxide that breaks the bonds between chemicals in the body. The decomposition that occurs during the Aquamation process is the same as the one that happens when the deceased is buried in the ground, just sped up by the chemicals, temperature and pressure involved.

"With burial, the groundwater is a little alkaline, so soft tissue decomposes and what remains is bones," Sussman said. "It's the same process; it just takes place in a much quicker manner. … It takes about six hours, and in the earth it could take 150 to 200 years."

No DNA material is left behind in the process, and the bone that remains is dried out and put in a processor that pulverizes it into the remains that are given to family members. The remains are white instead of the gray color that results from remains being burned. Families also will receive about 20 to 30 percent more remains when using Aquamation since with fire cremation, some remains may get stuck in the grooves of the bricks or grout in the chamber and some is oxidized and released into the environment, Sussman said. In addition, the water that is released to the wastewater system is sterilized and purified. So in the end, the Aquamation process doesn't put any emissions in the air and has 1/10 the carbon footprint of fire cremation, she said.

More on EntSun News
The environmental benefits alone were enough to convince Sussman, Kraft and their partner in the Aquamation portion of the business, Aaron Forgey (who already was serving as the company's manager and funeral director), that the investment would be worth it. But they are happy to offer an additional service to the families they serve.

"The most important reason we pursued it is that it is very ecologically friendly," Kraft said. "We're totally committed to helping preserve the environment, and there was an option on the table we weren't offering. There is no reason we couldn't, so we wanted to make it work."

And work is what they did. Adding the service wasn't as easy as just ordering the equipment. When Kraft-Sussman decided to pursue Aquamation, the law didn't allow it in state. In fact, only 19 states other than Nevada have laws that permit alkaline hydrolysis. The Nevada law defined cremation as only by fire. So the Kraft-Sussman team first had to go to the Nevada Legislature to get the law changed to allow Aquamation. Writing the bill and getting it passed in both the Assembly and Senate took a year, Sussman said, but with the help of Assemblyman Nelson Araujo, Assembly Bill 205 authorizing the use of alkaline hydrolysis for cremation passed in May 2017.

"Thankfully, our state legislature is very forward-thinking. In some states, this comes up year after year and it's not approved," Sussman said. "We had unanimous support in both the Assembly and Senate. The only people who were opposed or had questions were some of our competitors."

Since then, Kraft-Sussman has renovated their facility, located at 3975 S. Durango Drive, Suite 104, to accommodate the new Aquamation equipment, ordered the equipment (which takes about a year to build once ordered), obtained licenses and permits from local and state entities, and submitted to the required inspections. Now they are ready to move forward with offering Aquamation as an option.

Sussman estimates the option will be available starting at the end of June or mid-July.

Right now, Kraft-Sussman will be the only funeral home in Nevada to offer Aquamation. Sussman cited many reasons for that. First, the process is only now catching on in the funeral services industry. For the past 20 years, organizations such as the Mayo Clinic and UCLA Medical School have used alkaline hydrolysis cremation for the disposition of bodies donated to medical science, and some veterinarians have used it in their practices. It has only been used in funeral homes on a regular basis in the past five years, Sussman said. In addition, Aquamation is expensive to set up — about double the cost of a flame cremation unit, Sussman said. And finally, mindset matters.

More on EntSun News
"Other funeral homes may not have a mission in line with doing that like we do," Kraft said. "We're very concerned about the environment, more than our bottom line. And we don't have to answer to stockholders."

Although alkaline hydrolysis cremation isn't typically something people know about and it costs customers about 20 percent more than flame cremation, Sussman said she thinks it's a trend that will catch on as people look for disposition options that are less harmful. So the team is proud to have pioneered the movement in Nevada.

"We are all about trying to make things accessible for the families we serve. If we can bring Aquamation to the community when nobody else is, we're happy to do it, and hopefully people respond," she said. "We made the commitment to do this for the community, and I think the community will respond positively."

As for what's next for the funeral services industry in Nevada, Sussman said green burials are becoming more popular. There isn't a cemetery in Nevada that accommodates green burials yet, but Sussman said she is sure that at some point the option will be made available. When it is, she said Kraft-Sussman is currently the only local funeral home affiliated with the Green Burial Council, so it will be yet another option that falls in line with their mission.

For now, though, after such a long process, Kraft and Sussman are just looking forward to offering people the option of using Aquamation.

"It wasn't easy getting to this point — it has taken three years," Kraft said, "but we're excited to be able to offer this."