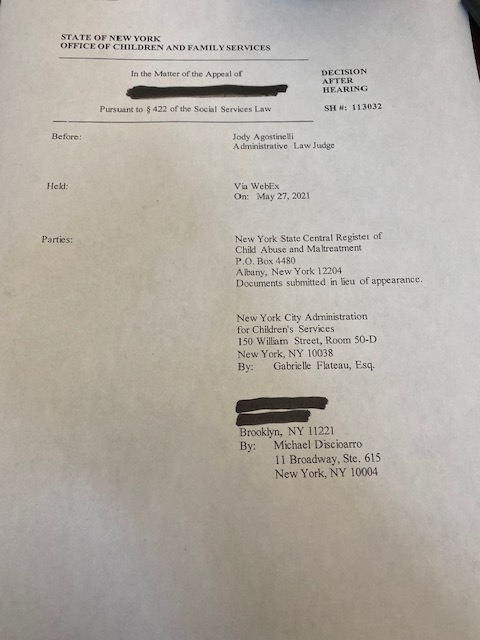 The Law Offices of Michael S. Discioarro, LLC Announces False ACS charges Dismissed by Judge In Favor of Client.
BROOKLYN, N.Y. - EntSun -- The case of ACS v C.G. docket no 113032, falsely accused the client of abusing their child. This included phiscyal abuse. The ACS worker did very little investigation but decided to charge the client with abuse. After an exhaustive hearing, the Judge find the client not guilty and dismissed the charges.
" We are very thankful to the court for a thoughtful hearing and a well written decision. My client never harmed her children and we are glad these false charges are dismissed." Mr. Discioarro said.
Each year, tens of thousands of New York City are falsely accused by ACS of child abuse and many parents don't know where to turn. ACS workers actually tell parents they do not need a lawyer because the case is not "in court yet" and demand that parents comply. This is simply outrageous. Parents have a right to counsel in the state of New York and it must be honored. ACS workers will come to a parent's home at any hour of the night and demand to see sleeping children. Once an ACS worker makes a charge of child abuse, the case is sent to court. The Law Offices of Michael S. Discioarro, LLC is here to help, call our hotline at 917-519-8417 24 hours a day.