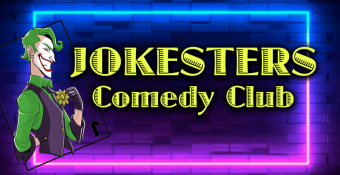 Prior to the pandemic, Jokesters Comedy Club was named "Best of Las Vegas" and Las Vegas Mayor Carolyn Goodman proclaimed it Jokesters Day in the entertainment capital of the world congratulating Barnhart and their 1000Th show.

Goodman added, "Special thanks are extended to Don Barnhart and all performers for entertaining residents and visitors alike.  Please keep the laughs coming as we offer best wishes for the next 1,000 shows and beyond."

Jokesters Comedy Club features some of the most hysterical, national touring comedians along with a rotating cast of resident headliners along with some of the best local comedy talent in Las Vegas.

More on EntSun News
Kicking off the opening month of laughter, Don Barnhart will serve as the resident headliner rotating between Jokesters Comedy Club at Alexis Park All Suite Resort and Delirious Comedy Club at The Downtown Grand Hotel & Casino making him the only comedian with 2 residencies in Las Vegas.  Don and his team are currently in negotiations to open a new venue as well as a national chain of comedy clubs.

For years, Don Barnhart perfected his craft touring the top comedy clubs and entertaining the troops around the world learning to work every type of audience before moving to Las Vegas.

Critics have stated, "Don Barnhart is hysterically funny, delivering well-written topical material with an improvisational flair that's not to be missed.  Don pushes the boundaries of "Cancel Culture" using common sense without being overtly offensive. He's a refreshing voice in comedy with the cleaver, witty insights of George Carlin and the facial expressions of Jim Carey.

The Modern Showroom is home to All Shook Up, All Motown, BurlesqQ, Late Night Magic, Big Little Variety Show and welcomes Jokesters Comedy Club into their lineup of successful shows.

"Classic Vegas entertainment has for more than a half-century included stand-up comedy and returning Don Barnhart's Jokesters to the lineup in the Modern Showrooms rounds out our amazing genres of live-stage shows", said Pete Housley of Admit VIP.

Showtimes for Jokesters Comedy Club are nightly at 8pm and general admission tickets being at 34.95 with VIP and Front row options available.

For more information or to purchase tickets, please visit our website at www.ModernVegas.com or call our 24 Ticket Hotline at 702-483-8056