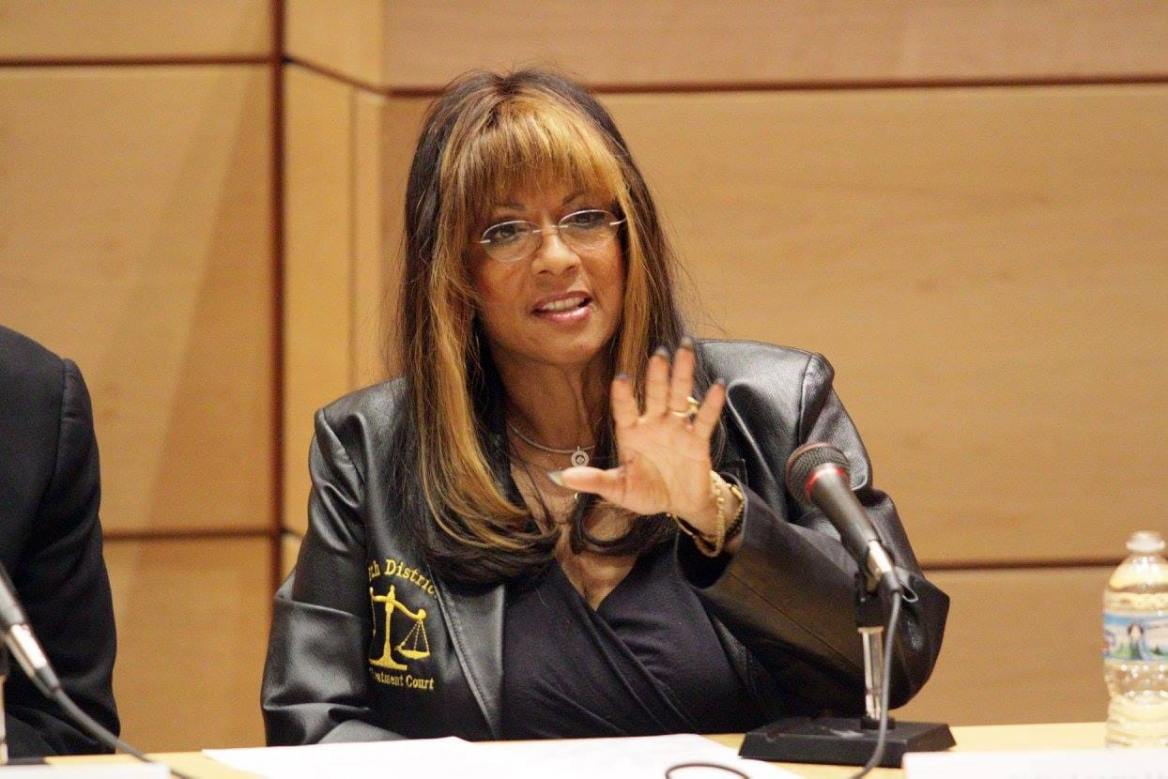 Her debut book YOUR HONOR, YOUR HONOR has won many awards including The Book Excellence Award, and The Independent Press Award.
DETROIT - EntSun -- Judge Leonia Lloyd, a powerful proponent of restorative justice, brings a lifetime of wisdom to the podium. This Champion of Justice Award winner changed the life trajectory of thousands of sex workers and drug addicts with one swift pounding of the gavel.

Judge Lloyd's work with unfortunates were acknowledged many times over. Judge Lloyd received many awards for her groundbreaking work in the substance abuse area and most notably she received written recognition from the Michigan Supreme Court, signed by all the Justices for her dedicated service to the Michigan justice system, to the citizens of Michigan and specifically to the people of Detroit.

In her signature talk: The Diamond Gavel Interrupts the Pattern of Failure; Judge Lloyd disrupts defeatist thinking by breaking through negative patterns to build a positive path forward. As a sought-after speaker, Judge Lloyd captivates her audiences with true examples of long-time victims transformed into victors. As a result, the 36th District Court became a real-life mission field where she helped society's outcasts find a road to redemption and restoration.

Time and again, the author of "YOUR HONOR YOUR HONOR: A Journey Through Grief to Restorative Justice," used the power of her position to stem the tide of violence, abuse, and addiction plaguing Detroit streets. For example, instead of the standard punishment, the National Indie Excellence Award winner partnered with the sheriff's department to expand Project Fresh Start into a system favoring training and advancement for repeat offenders.

More on EntSun News
Where the penal system saw washed-up alcoholics and drug addicts, she saw worthy candidates for her program. With a mustard seed of faith and the heart to change society Judge Lloyd made an indelible impact on Michigan one sentence at a time.

The city's law department acknowledged her efforts to eradicate society's ills by offering the unlovely and unwanted second chances. In Judge Lloyd's courtroom, no one was a throwaway. On the contrary, she saw each person as someone with potential, and therefore the possibilities for their future were endless.

Through her seminar: Let Your Brilliance Come Out To Play, Judge Lloyd shows crowds how to release the past and tap into their talents.  Attendees soon learn, "You can't shine if you don't think you can do it." Judge Lloyd helps participants detox from toxic thought patterns in her electrifying talks. She firmly believes in giving an encouraging word to break the hold of negative notions.

Her track record for success with offenders is only superseded by her work with school children, college kids, and law students. In honor of her late twin sister, she created the Judges Leona and Leonia Lloyd Twins for Justice Endowed Scholarship Fund at Wayne Law. She adds, "We believed strongly in education as a key that could unlock many doors."

Many Black and brown students dream of becoming legal eagles. Still, with minority enrollment dropping, Judge Lloyd stepped in to make their matriculation dreams come true. Judge Lloyd says, "When you get into law school, you don't have time to work at Burger King." She understands the time commitment it takes to make it in this field, and money should not be a deterrent for the next generation of barristers.

More on EntSun News
Through the Judges Leona and Leonia Lloyd Twins for Justice Endowed Scholarship Fund, she has awarded 20 scholarships to law students. In remembrance of her sister, she muses, "Our motto was, 'Have a dream, make a plan and start working toward that dream until you accomplish it. Don't let no one turn you around.'"

Judge Lloyd is a force to reckon with, whether ruling on the bench, changing hearts in the classroom, or unearthing "stinking thinking" at her conferences. Under her reign, the Project Fresh Start program expanded to a two-year certification where participants completed addiction therapy while learning a trade or higher education. "I watched them accomplish things they never thought they could remotely do in life."

Some went from eating out of garbage cans to finishing Project Fresh Start and soaring to the stratosphere. Many earned Bachelor's and Master's degrees that enabled them to become Counselors specializing in the substance abuse area as well as registered nurses. Additionally, the graduates seeing no limitation to their dreams and desires, those not academically inclined, went on to obtain lucrative "essential employee" jobs such as "long haul drivers". This is clear evidence Judge Lloyd's impact ripples through the Great Lakes State.

For more information on Judge Lloyd or to invite her to speak, visit JudgeLeonia.com