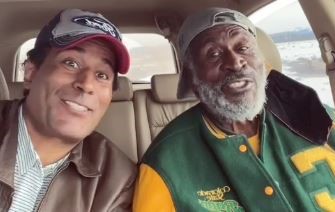 HOLLYWOOD, Calif. - EntSun -- "Coming 2 America" star John Amos and his son KC Amos launched a TikTok video that is gaining brisk momentum. The pair is featured singing a snippet of  Gladys Knight's classic hit, "Midnight Train To Georgia". The TikTok post is now gaining in its popularity online. The success of this post follows the previously successful post of the pair singing the hit single, Lovely Day", a post that gained global  engagements on social media.

More on EntSun News
Regarding the TikTok video, K.C. Amos shared, "The TikToker who inspired me to create this video is @420Doggface208. Everybody knows him as Doggface. This is amazing experience to see our video surge on Tik Tok. The story tellers mission is to shed light. If I can be a small part of someone being happy and feeling good, then I'm the happiest man on earth. And to see my Pops (John Amos) get a kick out it, it just doesn't get any better."

John Amos is best known for his starring role as James Evans on the hit CBS Series, "Good Times", along with starring roles in the Emmy Winning "West Wing", "All About the Andersons", and film classics like "Coming to America" and "Die Hard II". In addition to his stellar acting career, Amos was signed as a free agent for a brief stint with the Kansas City Chiefs, a time during which he was inspired to write the beginning of the "Turk". He is also starring in the upcoming release of "Coming 2 America".

John Amos is currently featured in The Hollywood Reporter's exclusive Superbowl feature that is currently trending on Google News during the countdown to Superbowl Sunday weekend.