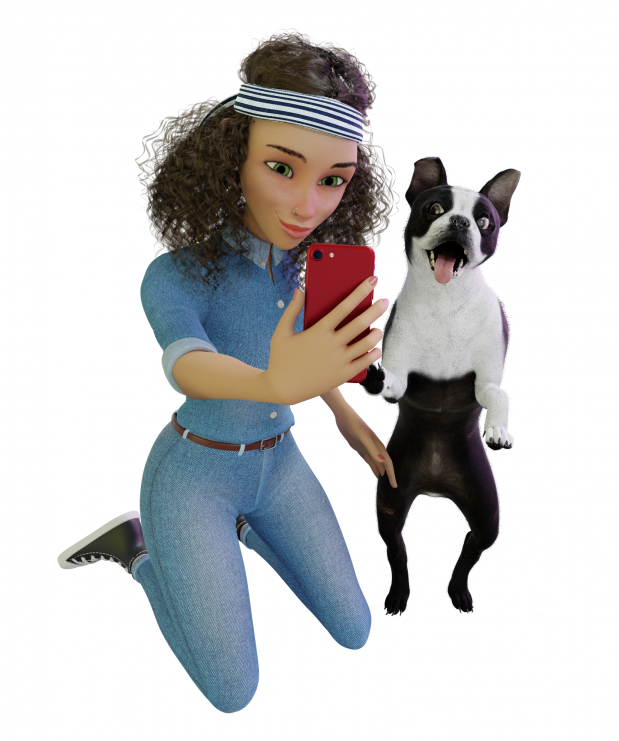 It's like a mix between No Reservations and Chef's Table, but animated!
LOS ANGELES - EntSun -- Chef Jade's Journey is a new animated series aimed at teaching kids about self discovery, travel and cooking. The show is hosted by Chef Jade, a Virtual Influencer that launched in 2020 on various social media platforms. She's described as a multi-racial female in her early twenties, with wild curly hair and a personality that can be compared to a mix of Michelin star chef Dominique Crenn and the late Anthony Bourdain. Jade is accompanied on her travels by her lovable sidekick, Zelda, a Boston Terrier whom she found on the streets of Berlin, Germany during her travels.

In the first season of Chef Jade's Journey, viewers will be taken to 12 countries where she has biologic roots, including Italy, India, United Kingdom, Mexico, Brazil, Jamaica, Japan, China, France, Greece and Germany. Jade's adopted, a fact her parents shared with her at an early age. She has always had questions about her make-up and promised herself that she would go on a journey of discovery after she graduated from culinary school. The first part of our world tour involves tracing her lineage all the way back to her great grandparents. Viewers will get a chance to learn about each place she's traveling to and why the food is so unique to it. She'll be cooking everything from traditional Mexican Tacos to a traditional Banoffee Pie. All recipes of course will be in a meatless format, since Jade herself is Vegan and will hosted on her website https://www.cookingwithjade.com/

More on EntSun News
Debuting at a time when families have developed more in-home hobbies, Chef Jade's Journey plans to aide in the cultivation of these hobbies and be a source of more layered educational content for their kids. It will also act as a window into other worlds and cultures.

"We're so excited to bring this animated series to the world! Each member of our team, which spans across the globe, understands how important a character like Chef Jade can be to young kids who are transition from their parental bubble to the unknown world", says Tori Arnold, Chief Operating Officer of Jade and Zelda, LLC

ABOUT Jade and Zelda, LLC.
Founded in early 2020, Jade and Zelda  is ran by Tori and Brandon Ross. The married couple saw the possibilities of the Virtual Influencer space early and realized that these characters can deliver information on many topics, without the baggage of issues that typically shadow a person in the "real world". This particular character was created to connect to younger audiences who may have questions related to identity.