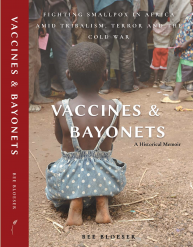 New memoir tells the story of a previous pandemic and how countries on opposite sides of an ideological divide cooperated to rid the world of an insidious disease.
SANTA BARBARA, Calif. - EntSun -- Award-winning author and public speaker Bee Bloeser of Santa Barbara will introduce her new memoir Vaccines & Bayonets: Fighting Smallpox in Africa amid Tribalism, Terror and the Cold War on June 24 at 4:30 pm PST. Ms. Bloeser will be in conversation with Phil Mayes, also of Santa Barbara. The event is free and open to the public and accessible on YouTube.

The COVID-19 pandemic is not the first pandemic Bee Bloeser has witnessed. In 1969, she and her husband Carl, a visionary and public health expert with the Centers for Disease Control's smallpox eradication program, moved with their two young children to Nigeria, a West African nation in the midst of a brutal civil war. While Carl supervised a team that could inoculate 1,000 people per hour, Bee navigated a culture fraught with tribal tensions, corruption, misogyny, and challenging customs to which she had to adhere.

More on EntSun News
After a year, Carl was transferred to Equatorial Guinea, a country smaller than Maryland, then under the rule of the brutal, megalomaniac dictator Francisco Macías Nguema. Mail was opened. Journalists and news outlets were banned. Residents disappeared. Spies abounded. Bee and the children experienced political quarantine and more than once feared personal attacks. She hid her cryptic diaries in the sock drawer. But Carl and his team stayed the course and prevailed: smallpox was eradicated from this country of 260,000 residents, at least ten percent of whom were murdered under the Macías regime.

As Sasha Polakow-Suransky, Deputy Editor of Foreign Policy magazine, writes, "Bloeser's book is both a captivating family history and a reminder—50 years later—of how public health campaigns are still inextricably intertwined with politics."

Ms. Bloeser's book launch will include video footage and photos from her time in Africa. The event is being produced by Gavin Roy Presents, INC., a Santa Barbara entertainment company.

Bee Bloeser has lived and worked in Africa, the Middle East and Native American nations. After retiring from a career in speech and language pathology, she moved to California. A member of USAID Alumni, Toastmasters International, PEO and multiple authors' groups, she's still in love with Africa.