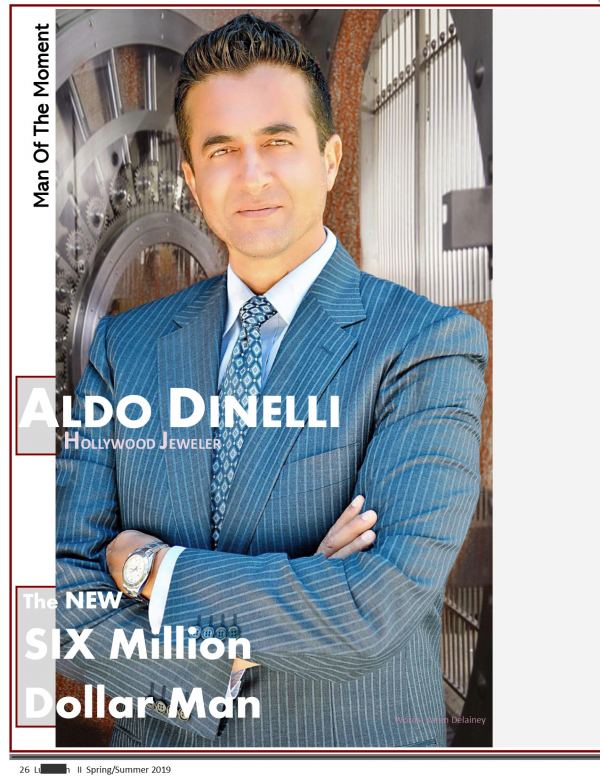 HOUSTON - EntSun -- Securing an interview with Hollywood Jeweler, Aldo Dinelli, "The New 6 Million Dollar Man" was not an easy task. Dinelli has a known preference for avoiding the press, and in true Hollywood fashion, he was the jeweler everyone was clamoring to talk to during the much publicized Drew Brees lawsuit that could have lasting future repercussions on how fancy colored diamonds can be marketed as "investments."

Earlier this year Dinelli founder of ICON Jewels,  expertise played a pivotal role within a team of professionals which resulted in a successful $6M dollar winning judgement in Mr. Brees' favor.

Speaking with a couple of jewelers on the famed Madison Ave. and 47th street, insiders best described him as an unconventional, non apologetic, straightforward professional, with  a refined eye and an intact sense of integrity.

Dinelli's father and older brother come from the oil and gas engineering and exploration industry. This might have been an easy fit for this overachiever, but instead he chose a different pipeline. His first opportunity opened at Cartier NYC, in 1990,  where he was under the wing of both Arnaud Bamberger, Executive Chairman of Cartier Worldwide, and Ralph Destino, the Chairman-Emeritus of Cartier, Inc.  It was here that Dinelli  showed his natural ability, tenacity, and dedication, and that in turn awarded him the respect and mentorship of the 'Quiet Legend' in the industry, Mr. Louis Glick, as well as other famed, powerful jewelers and "Godfathers" in this industry like Simon Critchell, and William Goldberg.

More on EntSun News
Aldo Dinelli went on to create his own company, ICON Jewels, a private jewelry house based in Houston,TX. with his partner and wife Cynthia Pinot Dinelli.

Dinelli has a history of collaborating with many jewelry houses, style icons, Hollywood stars and famed musical performers, as well as mega athletes. Throughout his career as a jeweler he has courted Presidential Families, including the late George H. W. Bush / 41st President Of The United States.

When I asked why he loved this business so much he simply smiled and said, "When you buy a jewel for yourself or a loved one, don't we all want something just as unique and rare as the person wearing it? I believe that investment grade rarity is where our clients should position themselves when acquiring something special for a loved one.  If the technical aspect and financial quotient of a fine piece doesn't synergistic-ally make sense, I simply wont present it to my clients. Jewelry is a form of expression, no different than love, food, and art...It is an expression of who we are; what we are…the very foundation of this business is based on the act of giving, and expressions of love."