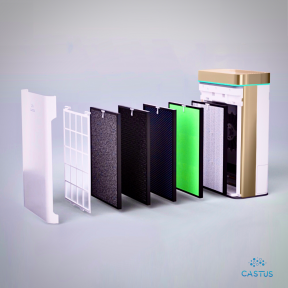 Castus is launching crowdfunding campaign to manufacture and distribute a revolutionary air purifier, sanitizer and humidifier.
VANCOUVER, British Columbia - EntSun -- As the world slowly emerges from the COVID-19 pandemic, health experts and citizens alike are shifting their eyes toward building a healthier, cleaner world.

In the effort to create cleaner homes, Castus is leading toward changing the way home air is purified in the post-pandemic era by introducing the most powerful air purifier, sanitizer, and humidifier ever built for residential use.

The startup has been developing their seven cutting-edge air purification technologies since 2012, with a vision to provide clean and healthy indoor air while increasing awareness of air pollution.

"Our team of scientists and engineers cares deeply about offering the ultimate air purifier," said a company spokesperson. "The events of the last year have motivated us to think outside the box and to create something impactful."

Designed with the home in mind, the Castus air purification's sleek, minimalist design includes a simple yet effective LED indicator that describes the level of air purity in a home using a system of four colors representing the highest to the lowest concentration of pollutants.

Castus is recommended for use with spaces up to 54 square meters or 581 square feet. It comes in Standard, Ultra, and Ultimate models featuring super quiet operation using an eight-speed, brushless motor.

More on EntSun News
Now, Castus is launching a campaign on the Indiegogo platform to crowdfund the Castus air purifier. The goal is to invite investors to help Castus enter to the mass production phase.

"We started this journey eight years ago and with five prototypes built and developed we are now ready to present Castus to the world," the spokesperson said. "In one phrase, Castus is the ultimate air purifier, sanitizer, and humidifier. We are ready to get Castus out to you."

For a limited time, anyone can sign up to learn more about the Castus crowdfunding campaign and access an early bird discount of 40 percent off at https://www.indiegogo.com/projects/--195024/coming soon.

Watch a video about the Castus Air Purifier at https://www.youtube.com/watch?v=MabwVya0ehk .